It’s the week after Labor Day, which means election season is now beginning in earnest. On the ballot this November 3rd are all 435 seats in the House of Representatives, 35 Senate seats, 13 governorships—in 11 states and two territories—and of course, the presidency. In a normal year, some volatility would be expected leading up to the first Monday of November, but 2020 is about as far from a normal year as the US has seen in nearly two decades. Numerous factors, from the COVID-19 pandemic to the ongoing recession to growing social unrest, are all at the forefront of voters’ and candidates’ minds alike, superseding more typical election issues of policy, economics, and infrastructure. So, what does this mean for the market?

On one hand, statistics and historical perspective show that over the course of dozens of elections the market has held up, tried and true, throughout various—and sometimes starkly different—administrations, Congresses, and geopolitical climates. As Figure 1 indicates, the S&P 500 has achieved price returns of 8.7% per year, on average, since 1944, largely agnostic of which party controlled the presidency or Congress. In fact, the S&P posted gains in 7 out of 10 years across all variations of political control.

Perhaps surprisingly, the market “hit rate”—or the proportion of years the S&P rose in value—was highest during a unified government under Democratic control, at 77% (roughly 17 out of 22 years), followed closely by a unified government under Republican control. This was not without some volatility, however; the S&P 500’s price return during the month of November in the five years in which Democrats simultaneously took control of the presidency and Congress averaged negative 2.4%. By December of each year, though, the S&P’s gains returned and persisted through the following year, on average. (Figure 2).

All this to say, a capture of Congress and the presidency by Democrats and the Biden administration, while a major shift from the Trump administration’s leadership over the last four years, statistically could be positive for the stock market, all else equal.

On the other hand, “all else” is not necessarily “equal” at the moment, potentially stripping away some of the relevance and predictive power of a historical perspective from the present geopolitical situation. After enjoying three years of a relatively strong economy and persistently higher stock market, the Trump administration must now contend with an economic recession brought on by a global pandemic, as well as markets that, while still solidly higher from Election Night in 2016 (Figure 3), are ripe with volatility. 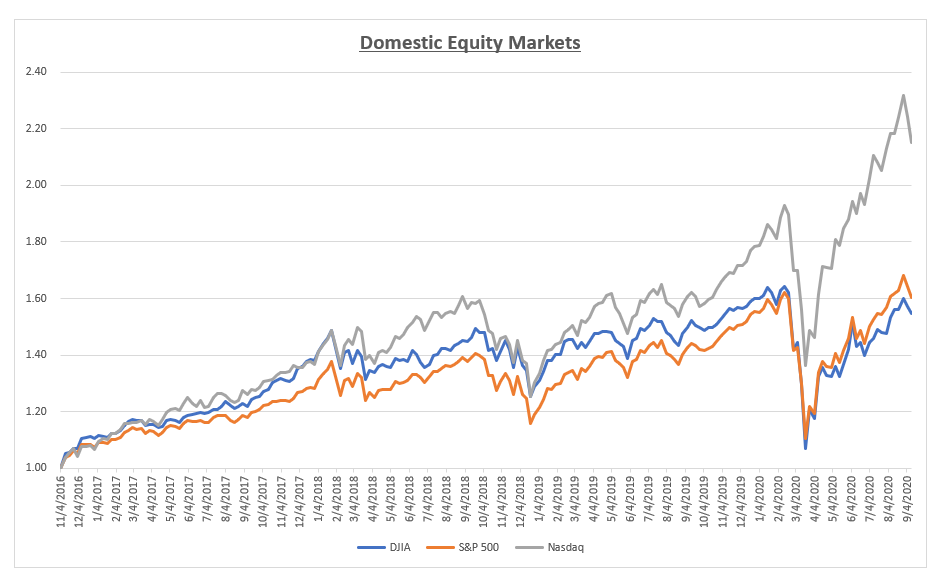 How the Trump administration and Congress handle the ongoing fallout from the recession and pandemic over the next two months could be a deciding factor in the November elections. Temporary stopgaps to help workers and support the economy, such as extended unemployment insurance, direct stimulus payments, and eviction moratoriums are quickly fading into the rearview mirror. While there appears to be some bipartisan acknowledgement that more support is needed, it seems increasingly unlikely that either side of the aisle will be able to produce legislation that is mutually agreeable in any form, potentially deflating the fragile recovery that has only recently taken hold of the economy and stock market. And while behavioral adaptations have made the ongoing public health crisis somewhat “livable,” a flare up of COVID-19 cases could threaten vulnerable states into tightening business and travel restrictions once again, delivering an undoubtedly devastating blow to those companies and small businesses that barely survived the first wave of lockdowns.

Interestingly, one market-based indicator, proposed by CFRA Research1, could give investors an advance look at the Election Night outcome. In each presidential election year since 1944, a decline in the S&P 500 during the period of July 31st through October 31st prior to the election has correctly indicated that the incumbent party holding the presidency would be unseated, save for the 1956 contest between Dwight D. Eisenhower and Adlai Stevenson. Presumably, investors could reference this phenomenon in placing their election “bets” following the market close on Friday, October 30th with some degree of confidence. But once again, 2020 is no ordinary election year. There is even uncertainty over the election process itself. With partisanship rampant throughout our government and society, as well as concerns about mail-in voting, foreign interference, and fraud, it increasingly appears as though we could see contested election results regardless of who leads in the polls. At an extreme, this could parallel the 2000 Presidential Election between George Bush and Al Gore that remained undecided up until a Supreme Court ruling in favor of Bush ended with Gore’s official concession over a month after Election Day. Amid the weeks between November 7th and December 12th, 2000, the S&P 500 fell by nearly 5%. While most polls show Biden leading Trump by some margin currently, these spreads are likely to tighten as November draws closer and any narrow victory, particularly in a “swing state” or one with a large number of mail-in ballots cast, could spur calls for a recount or other legal action, delaying a final result. Data from the Stanford-MIT Healthy Elections Project and FiveThirtyEight2, shown in Figure 4, suggests that election-related lawsuits stemming from COVID-19 and mail-in ballots are already on the rise and could affect outcomes in key battleground states with a high probability of casting deciding votes in the Electoral College. 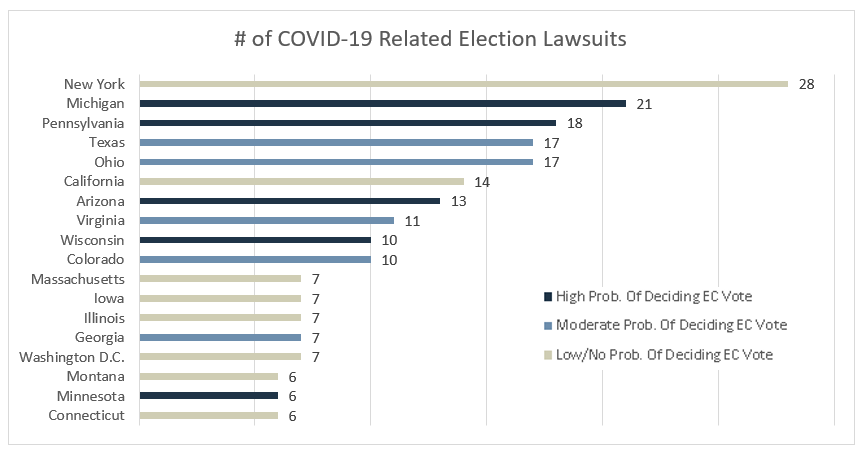 At the same time, it is not entirely fair to attribute the 5% decline in late 2000 to Bush v. Gore only; the S&P was already on weakening ground as the Dot-com bubble began to deflate and global markets lagged. Some see similarities emerging 20 years later as 2020 trudges along, marked by a juxtaposition of weak economic footing and record-high equity market valuations. Even with some up and down movements in recent weeks, markets have been on an astounding run since bottoming on March 23rd, with the S&P 500 up approximately 50% since that time. Much of these gains have been concentrated in mega-cap names and tilted toward the tech sector, with names like Apple up over 100% since March 23rd, Facebook up ~80%, and Amazon up over 65%. Other, more speculative stocks, such as Tesla and Penn National Gaming, have seen their share prices more than triple over this period.

Curiously, despite strong equity market returns, the CBOE Volatility Index (VIX), commonly referred to as the “fear index,” has also remained elevated. Typically, the VIX falls when stock prices rise consistently, as investors betting on additional downside in the options markets—the underlying driver of the VIX—take their money out of these short-term trades when they feel downside protection is no longer needed. Prior to this year, when VIX rose above 20, that would generally signal something was amiss in markets, but since March, it hasn’t dropped below 20, implying the market is expecting continued high volatility. (Figure 5). 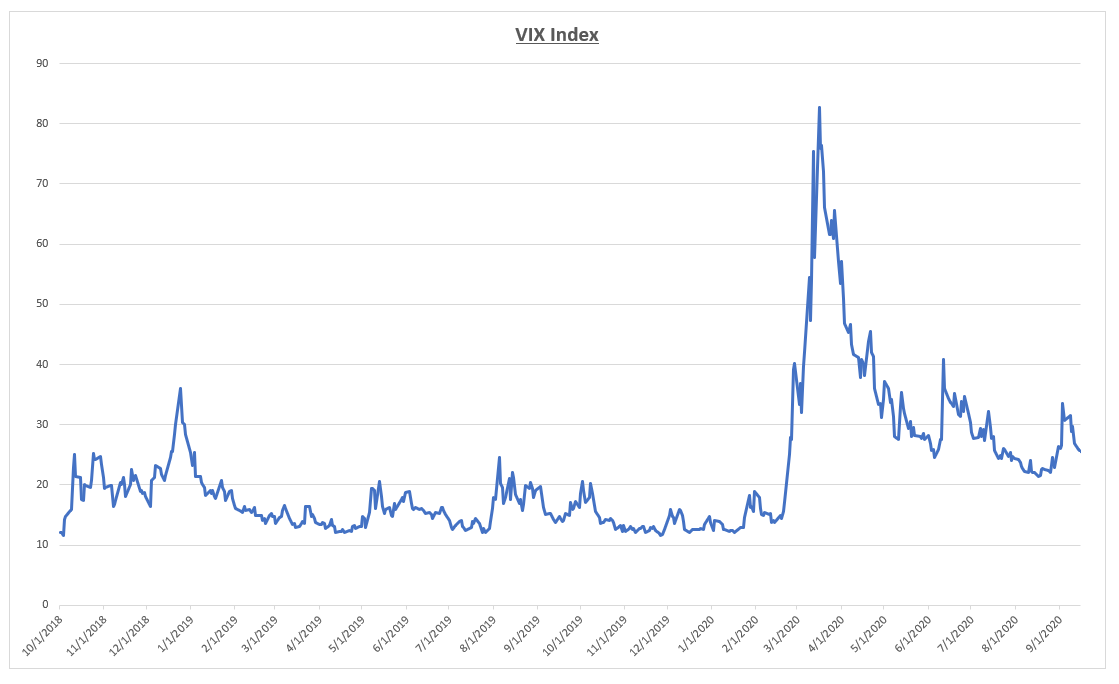 Pinpointing the source of this volatility is an impossible exercise, however. It is more likely that a confluence of factors—some without precedent in modern history—are having an impact on markets and stoking investors’ fears. It is similarly impossible to accurately predict election outcomes. Even if one could determine who might win the presidential election with any certainty, the true impact of the president-elect’s policies would not be felt for months, if not years, and—as any student of politics will tell you—may not necessarily align with the proposals proffered during the campaign. Very rarely can a new president effect all (or even most) of the changes they promised during their campaign, often stymied for various reasons ranging from Congressional inaction or opposition, budgetary constraints, and numerous other hurdles that permeate throughout our political system.

Therefore, we never recommend making investment decisions based on such unknowns. More important is positioning portfolios to weather any adverse scenario that could arise in the coming months. Key to this is avoiding chasing market momentum, which we achieve by maintaining disciplined valuation assumptions and investment theses. Active and opportunistic profit taking can also help right-size equity portfolios while freeing up capital to deploy into more stable investments, such as bonds and preferred equity securities. With an appropriately long time horizon, good quality investments will continue to generate solid growth that far outweighs near-term market turbulence and far outlasts inimical political tension. 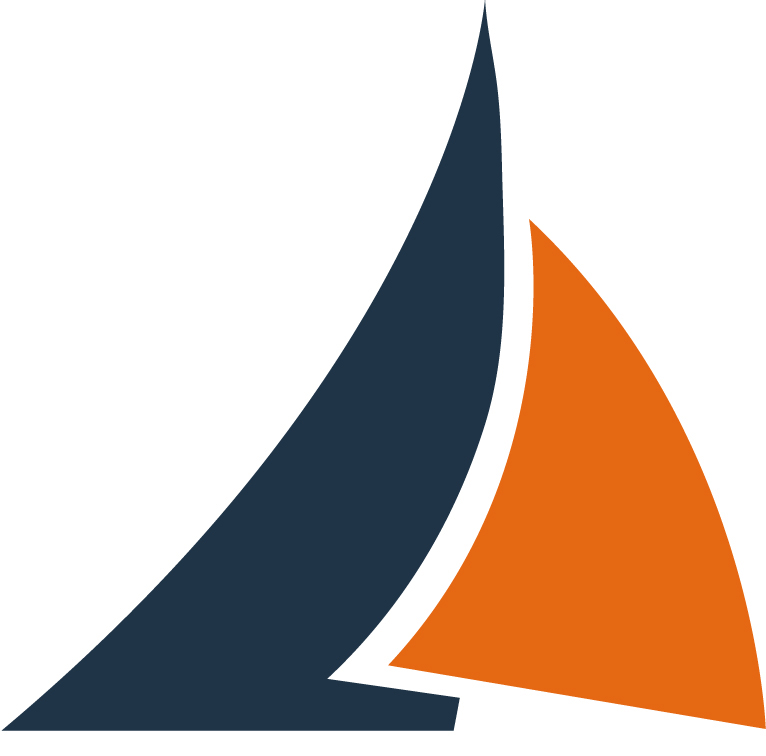