“Inflation is when you pay fifteen dollars for the ten-dollar haircut you used to get for five dollars when you had hair.”

Wall Street was snookered (again).  In the face of a deadly pandemic, evaporating economy, massive business failures and unemployment, a lot of experts were convinced the stock market was doomed. They were wrong.  Both the Dow and S&P indices closed out 2020 at all-time highs, while the tech-heavy NASDAQ missed the mark by a whisker.  As a result, these popular benchmarks posted impressive total returns for the year (S&P 18.4%, DJIA 9.7%, NASDAQ 45.1%).  Does the “bull” have life in it yet? 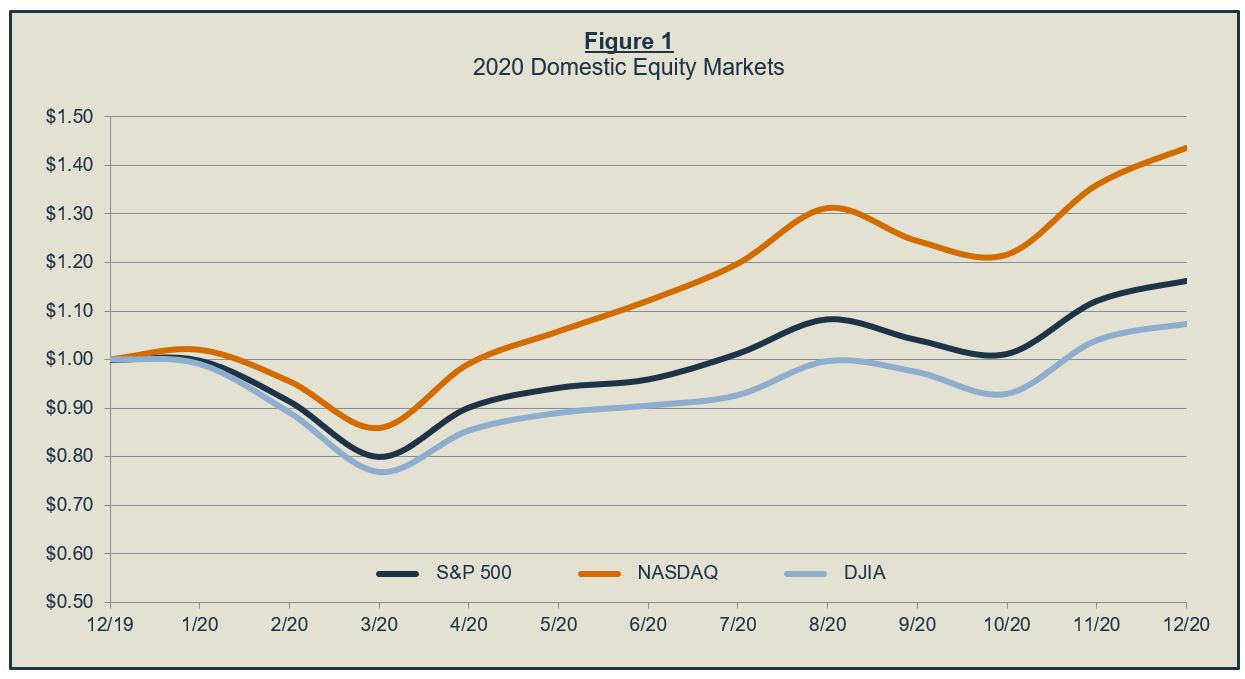 When it comes to equity investing, smart money always keeps an eye out for trouble.  And few things command more attention than inflation,1 taxes, and the price of credit.  Though these factors have been dormant for years, they can’t be ignored.  Inflation, for example, could be nudged higher from the reversal of both long- and short-term trends that have kept a lid on price increases.  The popularity of globalization, which has reduced input costs on goods for decades, is facing renewed criticism, exacerbated by supply chain failures in 2020 related to medical equipment and personal protective equipment for essential workers.  And improvements in efficiency from technological enhancements in production and supply chains may also have passed the “easy pickings” stage.  Those are the long-term disinflationary trends.   The major short-term trend that has kept prices down and will (hopefully) reverse in the coming months is the pandemic-related increased savings rates of consumers.  Armed with strong personal balance sheets and a robust desire to return to normalcy, a large consumer spending surge could be met with an insufficient supply of goods and services, as businesses have spent close to a year now tightening their belts.

On the second point, taxes, we do not expect immediate or drastic changes here, but it is something to monitor in the coming months.   Legislation tends to move slowly and the incoming Biden administration’s proposed increases are fairly targeted (i.e. reversing the top marginal individual tax bracket to 2017 levels and a partial reversal to the corporate tax cut from that year).  And expectations for the price of credit?  Well, more on that later. Importantly, should any of them reignite, the financial markets could face severe challenges . . . quickly.  Let’s take a closer look at the dynamics involved.

Begin with this proposition: the chief reason why individuals work and businesses risk capital is to generate income.  There’s the rub.  Taxes and inflation diminish income and, in turn, economic prosperity.   Equally worrisome, once this cycle starts, it’s tough to reverse.

To get a feel for how these variables interrelate, it’s helpful to establish a framework for analysis.  For this, we employ Irving Fisher’s century-old observation that the so-called “nominal” (or market) rate of interest is born of two prime determinants: creditworthiness and expected inflation.  Later academic work added another layer to Fisher’s theory – taxes.2

Study the figure below.  In creating the diagram, we imagined how Fisher’s formula would operate in a world void of inflation and taxes.  Without these factors, creditworthiness would become the primary determinant of interest rates.  For the sake of illustration, we’ve assumed this to be 2% and located it at the “point of origin” in the graph (i.e., the point where the horizontal and vertical axes intersect). 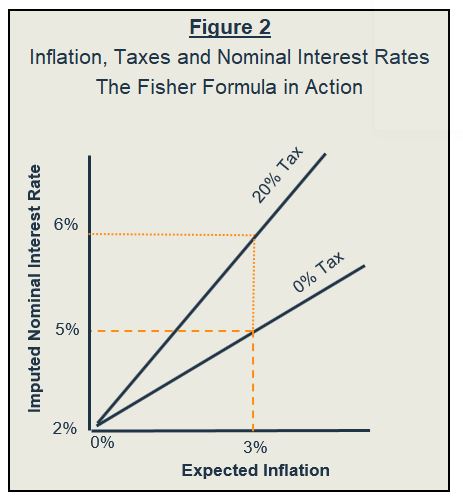 Now let’s introduce expected inflation, say at 3%.  All else equal, what nominal interest rate would yield the same real rate?  The answer is found by simply drawing a vertical line at 3% on the expected inflation axis up to the 0% tax rate diagonal and then over to the imputed interest rate axis (dashed line).  As shown, it would take a approximately 5% nominal yield to offset 3% inflation.

But we’ve yet to take account of taxes.  What if the applicable tax rate was 20%?  As before, the nominal interest rate is easily derived by extending our vertical line from 3% expected inflation to the 20% tax curve and connecting it to the interest rate axis (dotted line).  Now, nominal rates would need to balloon to about 6% to achieve a “real” rate of 2%. 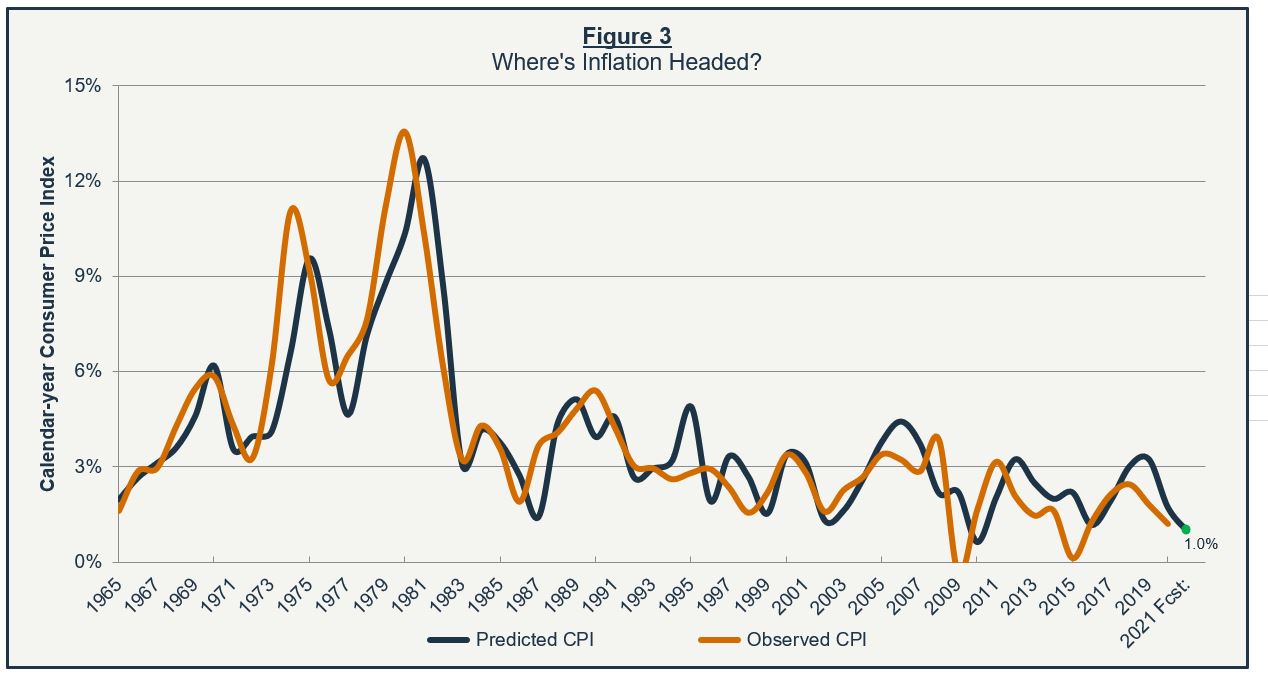 Disciplined investors don’t rely on gut reactions, of course; they ferret out empirical evidence to confirm theories.  On this score, statistical testing confirms a significant relationship between interest rates and inflation.   More precisely, our regression analysis shows prior-year interest rate fluctuations explain roughly 75% of the annual change in the Consumer Price Index.  And because it’s a “lagged” relationship, there are significant odds that inflation will hover around 1% this year (Figure 3, red marker).3

This brings us back to the price of credit.  Remember, financial markets are forward-looking.  Should fiscal policies push for higher tax rates or inflation expectations heat up, nominal interest rates would likely follow suit.  This would have obvious implications for borrowers large (like the US government) and small (a first-time car buyer just out of college) in the form of higher interest costs.  It would also pressure market valuations for both stocks, as we discount distant future cash flows back to the present at higher interest rates, and bonds (higher interest rates mean lower bond prices).  But the biggest impact may be on the Federal Reserve Bank and the market’s perception as to how it might respond.  For now, the Fed is adamant that short-term interest rates will remain ultralow for years to come and they will continue supporting the long-term debt market with large monthly purchases.  Higher than expected inflation or interest rates could lead market participants to reconsider just how much appetite the Fed has to continue its expansionary monetary policy.  If that happens, equity markets could come under pressure.  The bottom line is that taxes and inflation are a nasty brew.   So, while these risks appear low in the coming months, staying vigilant and protecting capital continue to be top priorities.

“Hence we are accustomed to say that the markets are “barometrical,” or that they “discount the future”… The careful security holder’s eyes turn eternally toward the future.  No system of evaluation can be of much account, no line of analysis can lead to any point of consequence, no long term investment program can promise any degree of satisfactory achievement, without full consciousness and acknowledgement of this underlying principle.”4

1  While there are numerous ways to measure inflation, this discussion focuses on the Consumer Price Index for All Urban Consumers (CPI-U) as reported by the Bureau of Labor Statistics.

2  Fisher’s work was published prior to the invention of today’s tax system.  America’s corporate tax, as we know it today, was created in 1909 and the personal income tax was born in 1913 upon ratification of the 16th Amendment to the United States Constitution.  For a detailed discussion, see Irving Fisher, The Rate Of Interest, The MacMillan Company (1907), p. 336.