At the close of 2022, investors were flummoxed by what to make of the year ahead. Following two consecutive quarters of declining Gross Domestic Product (GDP) in the first half of 2022, the US economy touched on a so-called “technical recession,” an unscientific term in the popular market lexicon.1 Equity markets responded in kind, declining substantially for the year. (S&P 500 -19.4%; DJIA -8.8%; NASDAQ -33.1%).

Will 2023 see renewed prosperity? When it comes to understanding business cycles, it often helps to examine the past. As we have written about in prior Insights, much of the US’s economic activity—neatly summed up by GDP—is driven by a few prime determinants. Chief among them are interest rates and their underlying factors, such as expected inflation and creditworthiness. In effect, “the price of credit” has a strong impact on the productivity and output of corporations and individuals alike. It would seem intuitive to expect interest rates and GDP to move opposite each other, given the effect of rates on consumers’ and corporations’ ability to borrow. Yet, as depicted by the orange trendline in Figure 2, there is a seemingly counterintuitive relationship between nominal interest rates and GDP, in that robust economies have often occurred during years where rates rose meaningfully—and vice versa.

This phenomenon may be partly due to changes in factors that underlie interest rates themselves. For one, inflation tends to rise during periods of prosperity as stronger demand drives up prices of goods and services. Since the turn of the century, the Federal Reserve has also taken advantage of bullish economic cycles to raise short-term policy rates and enact other monetary programs, often in an attempt to balance out inflationary pressures and keep price levels within a targeted range.

Conversely, inflation and monetary policy tend to ease amid economic downturns, thus producing lower nominal rates, all else equal. Still, interest rate movements do not occur in a vacuum. Substantial changes can reverberate throughout the economy well beyond the year they occur. Indeed, statistical testing reveals an inverse relationship between rates and GDP developing after roughly two years. (Figure 3).

Given this correlation, historical interest rates possess some explanatory power when it comes to future economic conditions. Combined with prior equity market performance—which can be viewed as a reflection of investor sentiment on the future of the economy—and historical GDP outcomes, a reliable estimate of year-ahead economic conditions can be formed from simple market-driven factors. And for this year, the data points to real GDP of just over 0.8%. (Figure 4).

Admittedly, forecasts this early in the year are a bit nebulous, and it would be fair to incorporate some margin of error. Yet, statistical analysis shows a hearty 73% chance of positive economic growth this year. Not too shabby given 2022’s challenges. Economists and market analysts by and large appear to agree, with consensus estimates pointing to real GDP growth of 0.58%. (Figure 5). 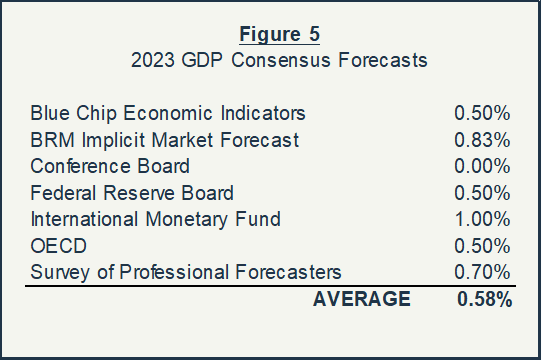 So, what does this mean for investors? While economic growth looks relatively “anemic” compared to its historical average,2 the odds of negative GDP—and a potentially deep recession—in 2023 appear low. Importantly, keep in mind that these GDP estimates are annual figures. Like in 2022, we could see another brief “technical recession” should two quarters of GDP turn negative. But of course, markets are inherently forward-looking. And considering their performance over the last 12 months, the potential for a “technical recession” may already be largely priced-in, leaving relatively little downside left in equities. In short, look for a potential market rebound in 2023, as it is something we would typically expect to precede a positive change in economic tides.

1 The National Bureau of Economic Research (NBER), the arbiter of US recessions, has not declared one for 2022.