“A billion here, a billion there, and pretty soon you're talking about real money.”

Equity investors who understand risk/reward tradeoffs never rest.  They are always on edge about possible meltdowns and monitor the markets accordingly.  Still, even smart money was caught short when Covid-19 washed ashore.  But unlike the naysayers, it’s a safe bet they busied themselves searching for opportunity and didn’t waste time licking wounds.  Judging from the figure below, those efforts paid off.1

So now what?  On the heels of the intimidating correction that greeted the pandemic, share prices rebounded quickly and significantly.  And a second downturn notwithstanding, the bull run resumed.   As shown in Figure 1, all of the popular indexes posted impressive first quarter gains (DJIA 7.8%, S&P 5.8%, NASDAQ 2.8%).

Coming atop the recently enacted $1.9 trillion Covid relief bill,2 it’s not surprising that the Biden Administration’s new push for $2 trillion in spending that includes a focus on infrastructure has Wall Streeters buzzing. Talk of a burgeoning national debt is garnering attention.  But how concerning is it?

Let’s start the discussion by distinguishing between two often confused terms: the “national debt” versus the “national deficit.” In a nutshell, the deficit is the amount by which federal spending exceeds revenues (i.e. taxes) each year, while our national debt refers to the accumulation of annual deficits over a span of years.  Study Figure 2 and notice how America’s national debt has trended higher for decades now (green bars).  Though it has grown considerably, the analysis lacks perspective.

Look at it this way.  There’s a reason why billionaires can shoulder more debt than the average wage earner.  Their creditworthiness is vastly superior and nobody gets overly alarmed when they borrow heavily—even in excess of their income.  Now think about our national debt from this angle.

By official definition, Gross Domestic Product is the sum of incomes earned by individuals and businesses within our borders.  A useful insight emerges by simply contrasting national debt with GDP (Figure 2).  Notice that our cumulative debt has topped incomes for several years now.3  Yet the sky didn’t collapse and the country prospered.

While some observers worry about the United States defaulting on its debt, the possibility of it happening seems remote barring a self-inflicted wound like a repeat of the arbitrary debt-ceiling fights of the early 2010s.  In fact, Standard & Poor’s (a major credit rating agency) recently reiterated the US government’s AA+ rating following passage of the American Rescue Plan Act citing, among other factors, the country’s strong economy and extensive monetary policy flexibility.  Plus, according to BlueChip Economic Indicators, today’s consensus economic forecast anticipates supernormal growth as the nation reopens.4

Another primary concern is the potential impact of burgeoning federal debt on inflation. As we’ve observed here previously, inflation is an insidious tax on economic activity and a prime determinant of the price of credit. Clearly, if rampant inflation put significant upward pressure on interest rates, few observers would expect equity markets to remain calm. Still, while the threat of inflation is ever present, the odds of hyperinflation in the immediate future remain low according to consensus estimates. (Figure 3).5 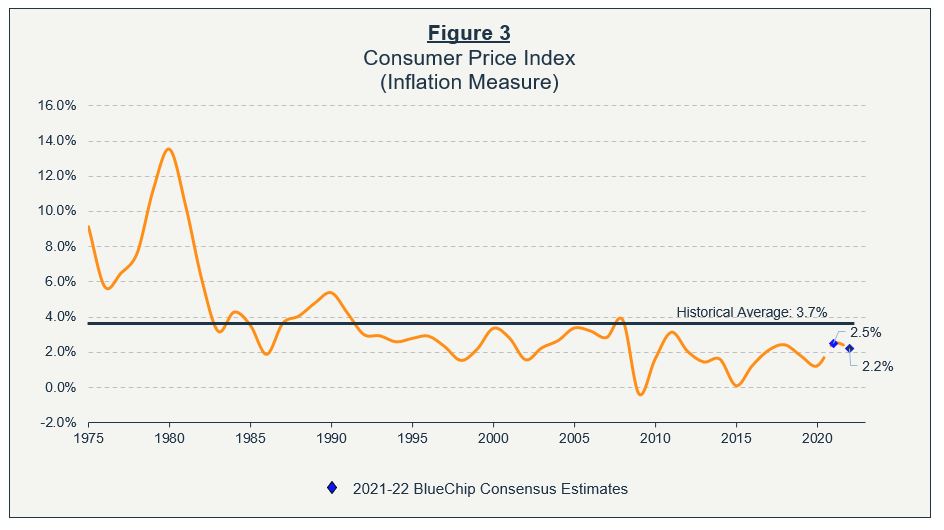 Which brings us back to interest rates.  True, mid-to-long-term Treasury rates have risen sharply in recent weeks, and further increases could trigger market volatility and raise concerns about the government’s debt servicing ability.   But in a way, the Federal Reserve may actually like what it’s seeing.  After all, some of the more speculative areas of the market have been taken down a peg.  What’s more, while higher borrowing rates hurt businesses and consumers, credit spreads (i.e., what borrowers pay in excess of the risk-free rate) have remained narrow as the strengthening economy improves creditworthiness.  And while higher, rates have only moved up to pre-pandemic levels (Figure 4).  Thus for now, debt servicing isn’t an issue.  And measured as a percentage of GDP, government outlays for interest payments are hovering around 1.7%, well below the 3% peaks witnessed during the late 1980s and early 1990s. 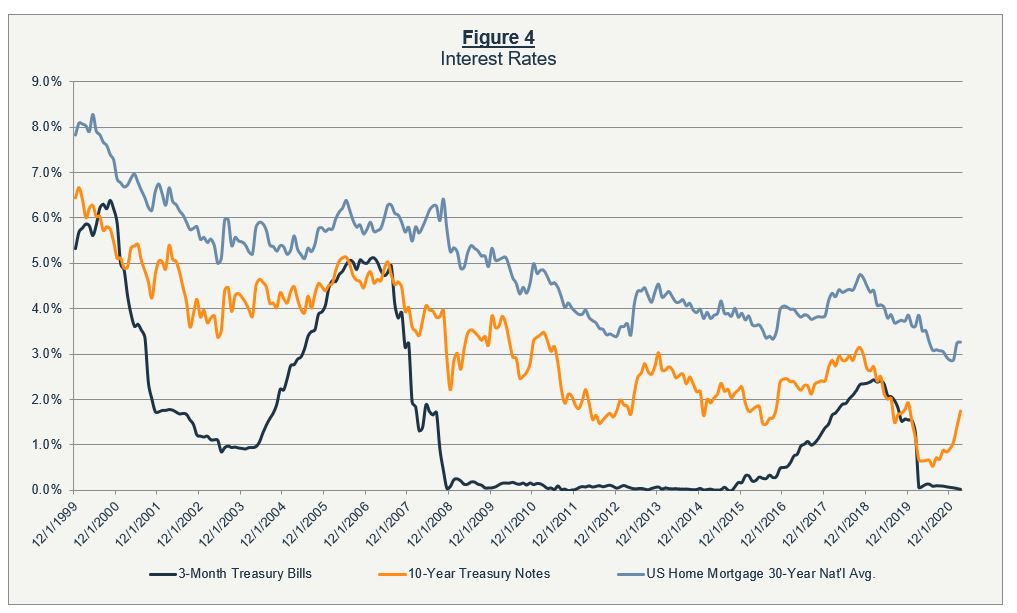 So where does this leave investors?  Stocks, especially those of strong companies with the ability to raise prices and scale costs, can be a good hedge against inflation risk.  While the potential for increased costs via rising interest rates could weigh on margins, a robust economy would spur strong offsetting sales growth.

Rising rates from increasing growth expectations may be good for bond investors too, thus keeping rates from rising too-far-too-fast.  US Treasury bonds are a rarity in Developed Markets right now, offering positive yields across the curve.  For most major European countries, bond yields are negative all the way out to 10-year maturities – and even out to 30-years in Switzerland.  Market strategists are projecting a massive rotation and rebalancing of portfolios among major institutional investors (endowments and the like), taking gains from equities to lock in “risk-free” Treasury returns at higher levels than have been seen for most of the past year.  That said, higher interest payments to bondholders mean there is less cash available for stockholders, not to mention the discounting effect of higher interest rates on future profits weighing on current valuations.  Higher interest rates also create competition for stocks in another way – many investors will gladly choose a risk-free 10-year annual yield of 2% (if/when that occurs) from a US Treasury versus the relatively paltry 1.5% dividend yield offered by the S&P 500 Index now.

Here’s the bottom line: a resurgent economy coupled with strong balance sheets will be going head-to-head with concerns over higher interest rates and inflation.  Given already high market valuations, there’s not a lot of room for error.  Now’s the time to ensure portfolio return objectives are adequately balanced against the risk of achieving them.

“The future cannot be analyzed; we can seek only to anticipate it intelligently and prepare for it prudently.”

3  According to U.S Treasury, aggregate indebtedness exceeded GDP at the end of World War II as well.

4  According to BlueChip Economic Indicators, a survey of some 50 economists, real GDP is expected to grow by a whopping 6.3% this year followed by another strong performance (4.3%) in 2022.

5  See our Insights article “Inflation: Will The Sleeping Giant Awake in 2021?” for a broader discussion about inflation https://bostonrm.com/insights/2021-inflation.