“It is clear that those with a fixed dollar income will suffer when the cost of living advances, and the same applies to a fixed amount of dollar principal.   Holders of stocks, on the other hand, have the possibility that a loss of the dollar’s purchasing power may be offset by advances in their dividends and the prices of the shares.”

Wall Street ended 2019 with a bang.  Significant headwinds notwithstanding, all the major market barometers closed at, or near, all-time highs with the S&P 500 gaining 28.9%, the DJIA 22.3% and the NASDAQ 35.2%.  What’s more, the United States experienced its first recession-free decade in recorded history.  Does the bull run have life in it yet? 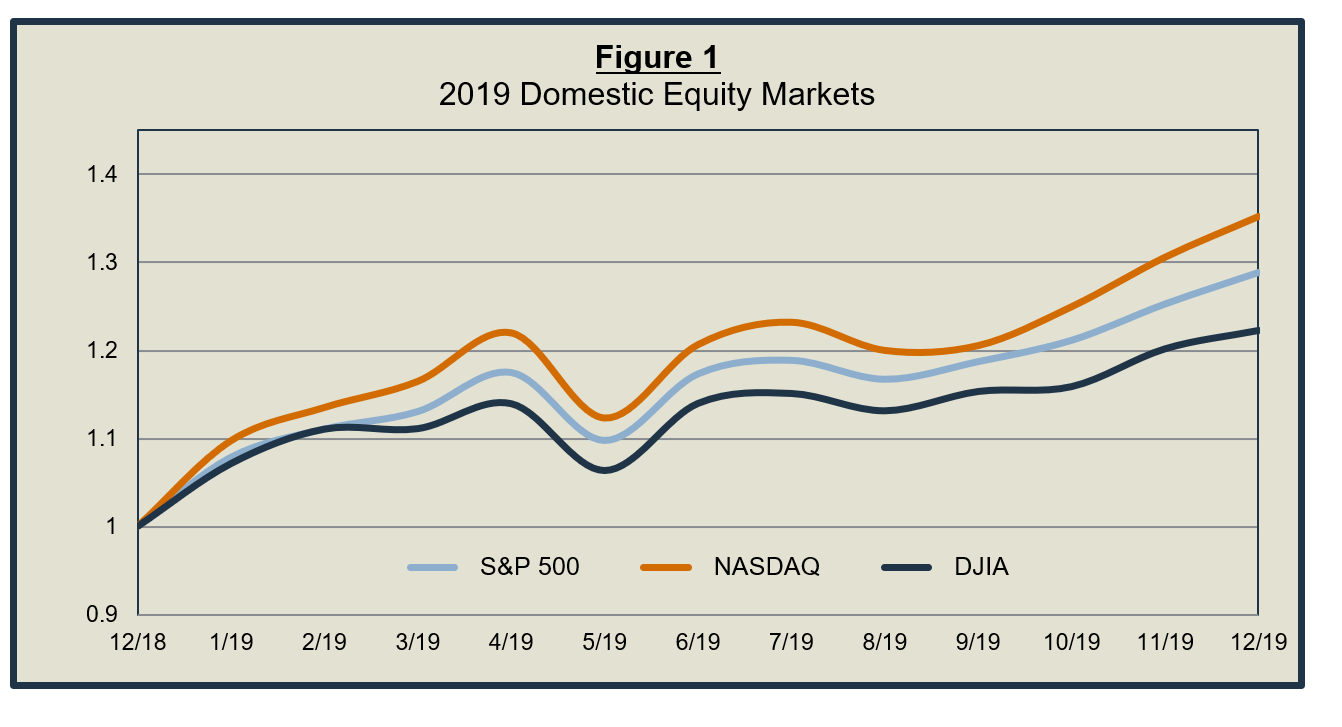 When it comes to equity markets, there’s always a wrinkle.  Even with a decade-plus of strong equity returns, investors have suffered some Maalox moments.1 For example, the S&P declined more than 18% from late July to early October in 2011.   And more recently, market participants endured nearly a 20% drop in late 2018 (Figure 2).  Doubtless, 2020 will see its share of speed bumps as well.  So, after a decade of historically low interest rates, modest inflation and more than a doubling of share prices, it's not surprising that investors are fidgety.  But should they be?  There are significant odds that the economy will roll on.

Let’s start by recapping our recently published outlook for Gross Domestic Product.  As reported, statistical analysis of credit-market price movements suggests that the 2020 GDP will finish in positive territory, stretching the current expansion to 11 years (another record).2  And since the stock market is a measure of economic health (albeit an imperfect one), that’s good news.  Could there be a surprise?  Absolutely.  And one sleeper is inflation. 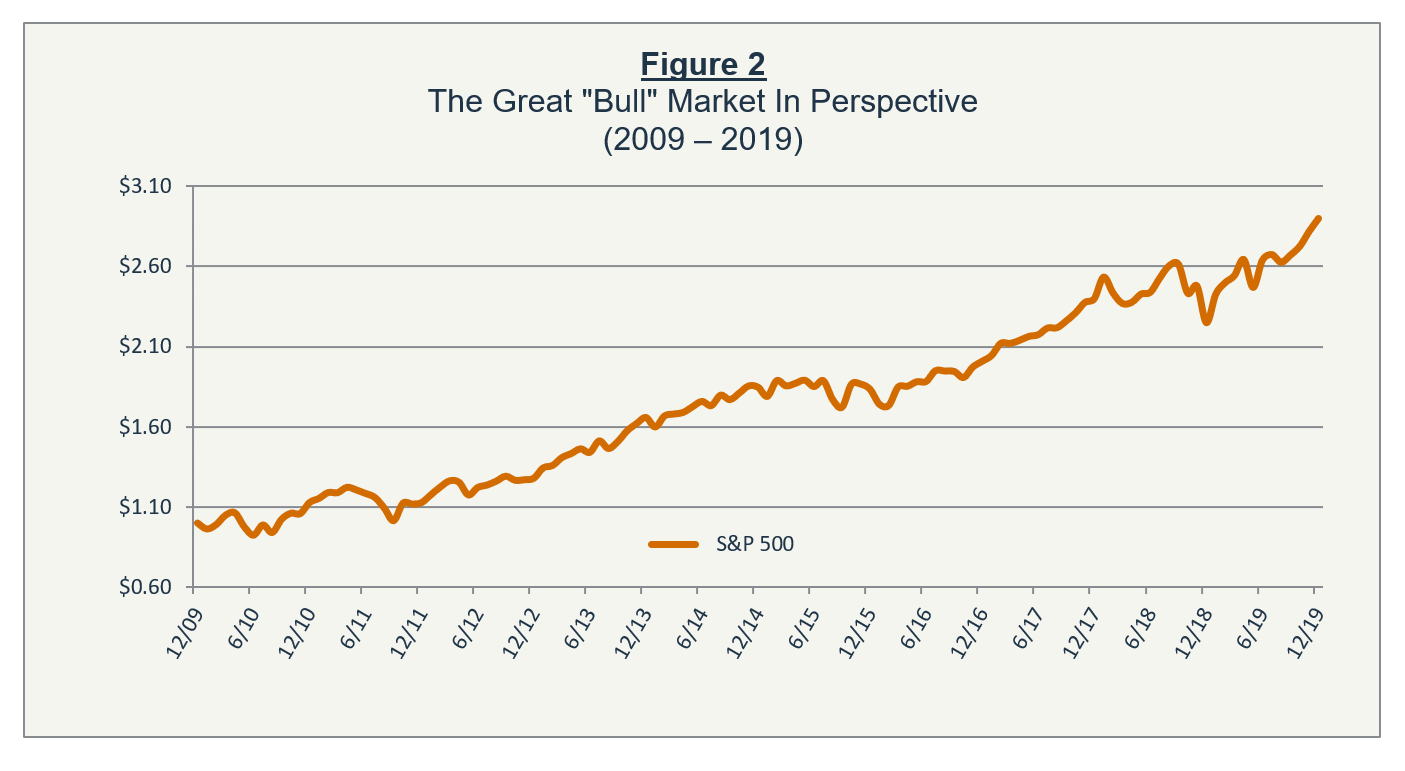 While academics may quibble over the details, most subscribe to a simple axiom: if you tax something, you’ll see less of it.  There’s the rub.  In our economy, we tax labor and capital.  Make no mistake, inflation acts like unlegislated tax on productive activity and, once ignited, it’s tough to control.

Boiled down, the value of a dollar, no matter how it’s earned, is its purchasing power.  Much like a tax, inflation reduces the quantity of goods and services that each dollar commands.  For a consumer-based economy, that’s a problem since (by official definition) the sum of all incomes equals GDP.

So, what is inflation?  For most people, the first thought is probably the cost of milk going up at the grocery store.  Behind the scenes, that is a business choosing to raise prices on milk either because their own costs have risen or simply because they can (pricing power).   And if that business happens to be a publicly traded company, its investors can be rewarded with growth and higher dividend payouts.  There are other implications.  Rising inflation also can lead to rising wages, meaning consumers can pay down debt more easily.  For example, an individual’s fixed monthly mortgage payment might eat up 50% of their salary in the early years, but with an increased salary, just 20% in later years.   Conversely, if income doesn’t rise with inflation, individuals can find themselves in unsustainable situations with cost growth outpacing income.  For these reasons (and many more) the Federal Reserve keeps a close eye on inflation and keeping it in check is part of their mandate.  So where is it headed?

In the world of economics, few theories withstand the test of time.  One survivor is Irving Fisher’s century-old proposition that inflation impacts interest rates and, in turn, economic growth.3 A simple exercise illuminates the relationship.   Fisher's theory states investors will demand to be compensated for the cost of inflation and taxes.  In our example below (Figure 3), the base case shows that in a world with zero inflation and no taxes, the market (aka “nominal”) rate of interest would equal the inflation-adjusted (“real”) rate of interest (Scenario 1).  Now introducing inflation at, say, 3% and a 20% tax rate (Scenario 2), investors' returns would fall short of the real rate.  Given Fisher’s theory, the nominal rate must rise to adjust for that – a higher interest rate must be paid to net a 2% real return after inflation and taxes. 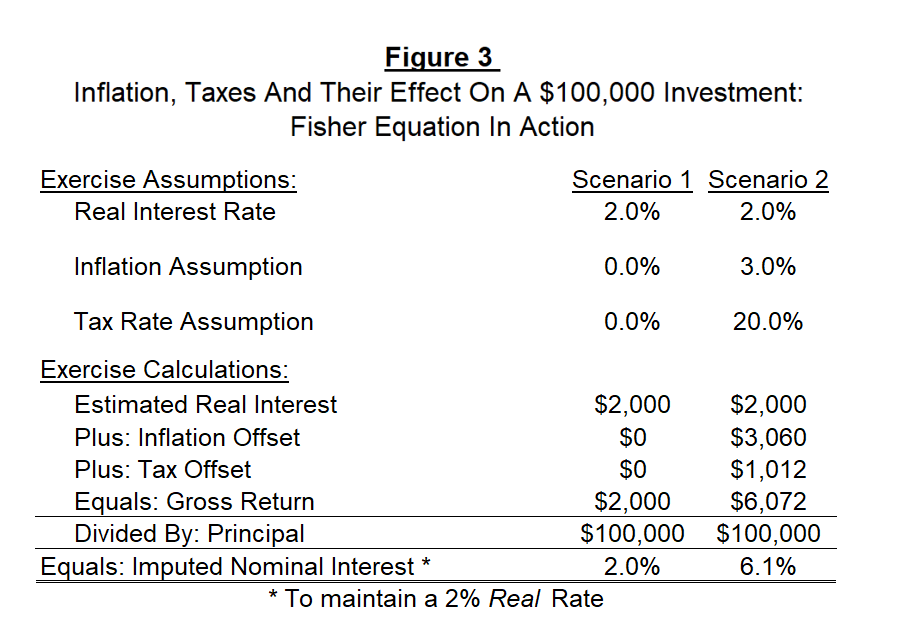 Given the importance of inflation to Fisher’s formula, it’s not surprising that forward-looking interest rates offer a reliable way to quantify the inflation threat.4  More specifically, regression analysis reveals that greater than 70% of the annual CPI change can be explained by prior-year changes in Treasury bill yields (Figure 4). 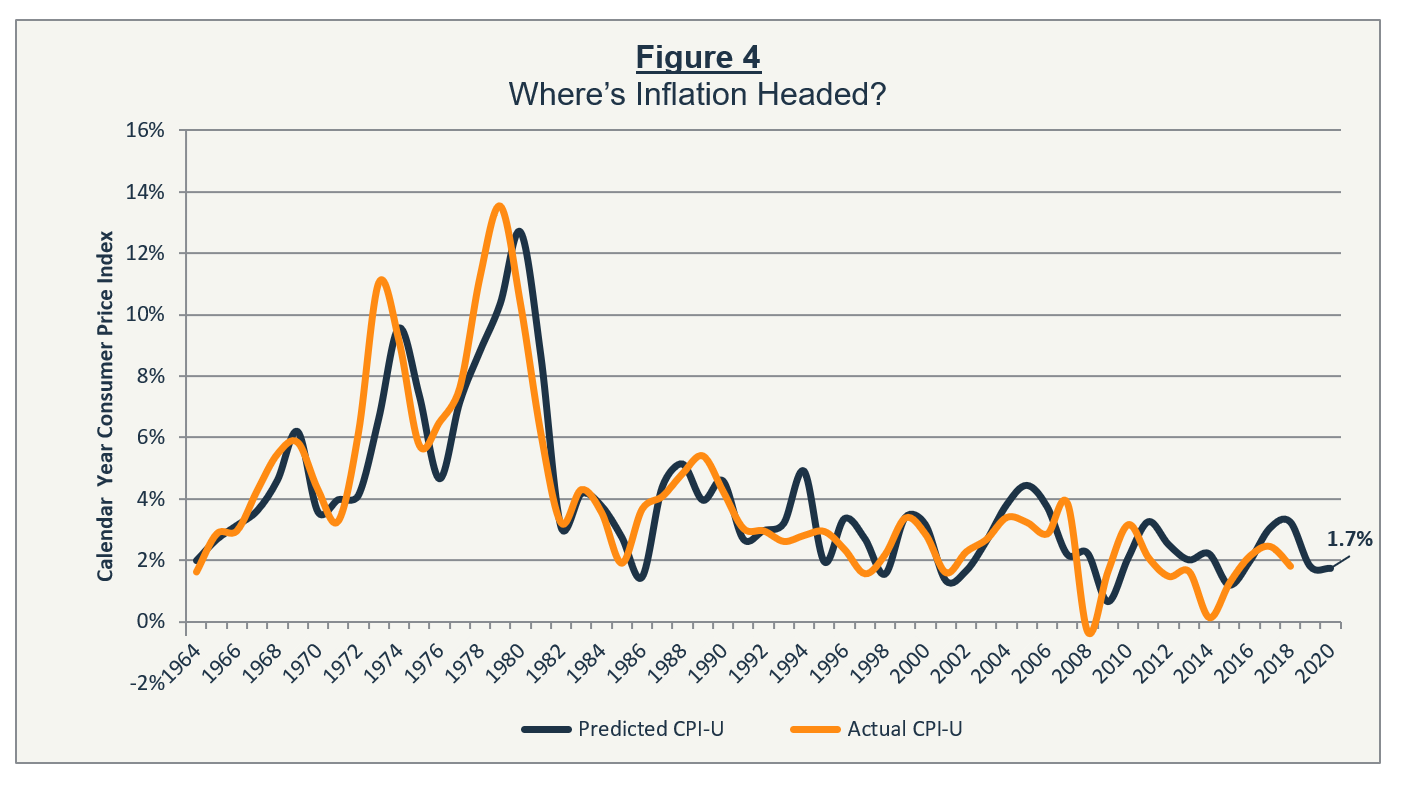 The bottom line: as depicted by the blue end point, this year’s CPI is likely to remain calm (1.7%) with better than a 90% chance of being less than its historical norm.  Coupled with a growing economy, investors should expect equity risk to be rewarded again in 2020.

1 Unfortunately, we may have to retire this reference as our research uncovered the fact that Novartis stopped manufacturing the antacid Maalox in 2012.