“[Investors] must develop self-control, both to refrain from attempting to profit by the short-swing fluctuations, which are what most people endeavor to follow, and to act quickly to take advantage of the major movements, from which people fail to profit.  This is because they are infatuated with prosperity or scared by panic or depression.”

Despite a pullback in May, stocks continued rallying through the second quarter of 2019 to end the period near record highs (year-to-date returns through 6/30/2019 - DJIA +14.0%; S&P +17.3%; NASDAQ +20.7%). With the probability of the Federal Reserve cutting short-term interest rates growing to a near certainty, equity investors have become more exuberant, reversing off their subdued sentiment from the end of 2018. And while trade tensions still weigh on the market, rhetoric between the US and its trading partners appears to have moderated for the time being, sparing investors from further disconcerting news headlines. 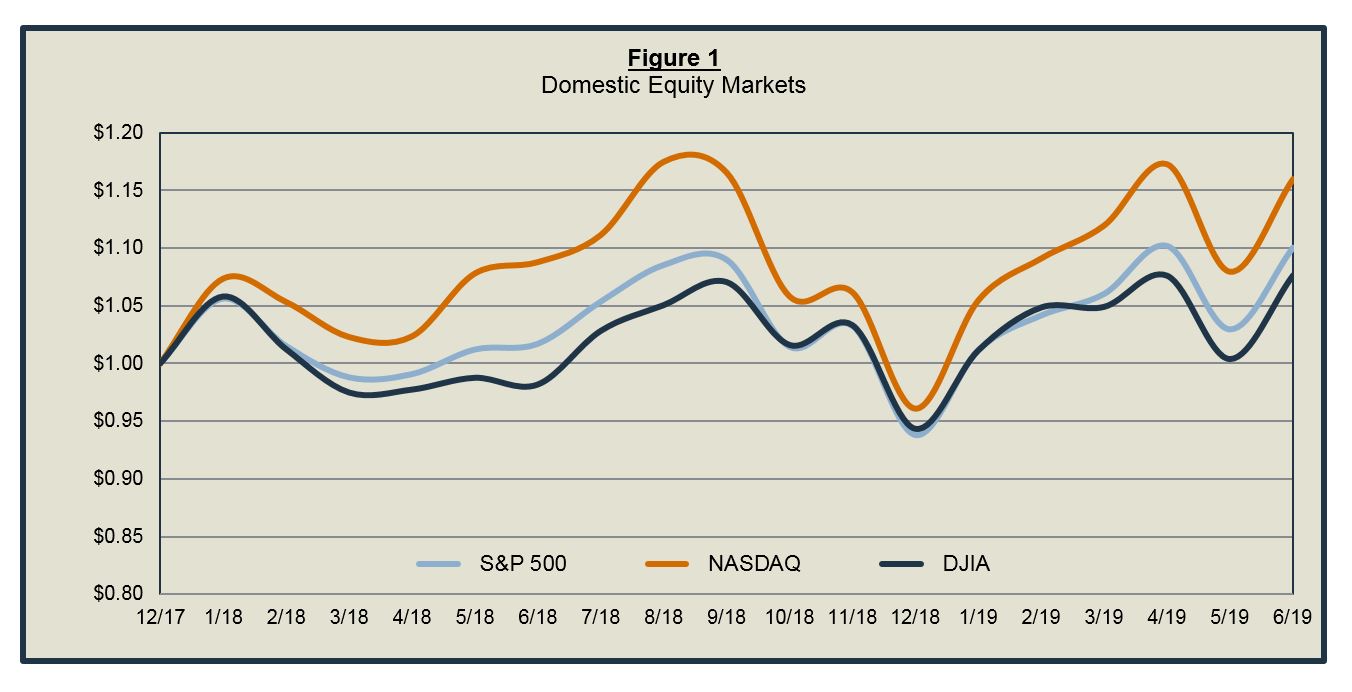 In large measure, equity investing is about maximizing after-tax returns while minimizing risks. Unfortunately, it’s a maxim easier said than done, especially when emotions rule and discipline is abandoned.  And while many Wall Streeters fancy themselves as steady “long-term” investors, reality suggests otherwise.  In bull markets, they’re driven to achieve “relative” performance. In bear markets, they flock to riskless assets and the protection of “absolute” returns.1  Make no mistake, such fickle behavior is a prescription for mediocrity and lost opportunity.

The current cycle is no exception.  Notice in the figure below that the S&P shed more than half its value near the midpoint.  Even carefully assembled portfolios came unglued as skittish investors panicked.   It was a mistake.  Measured from its March 2009 low, the S&P rebounded to close out the recent quarter at 2,941.76 -- a whopping 342% gain. 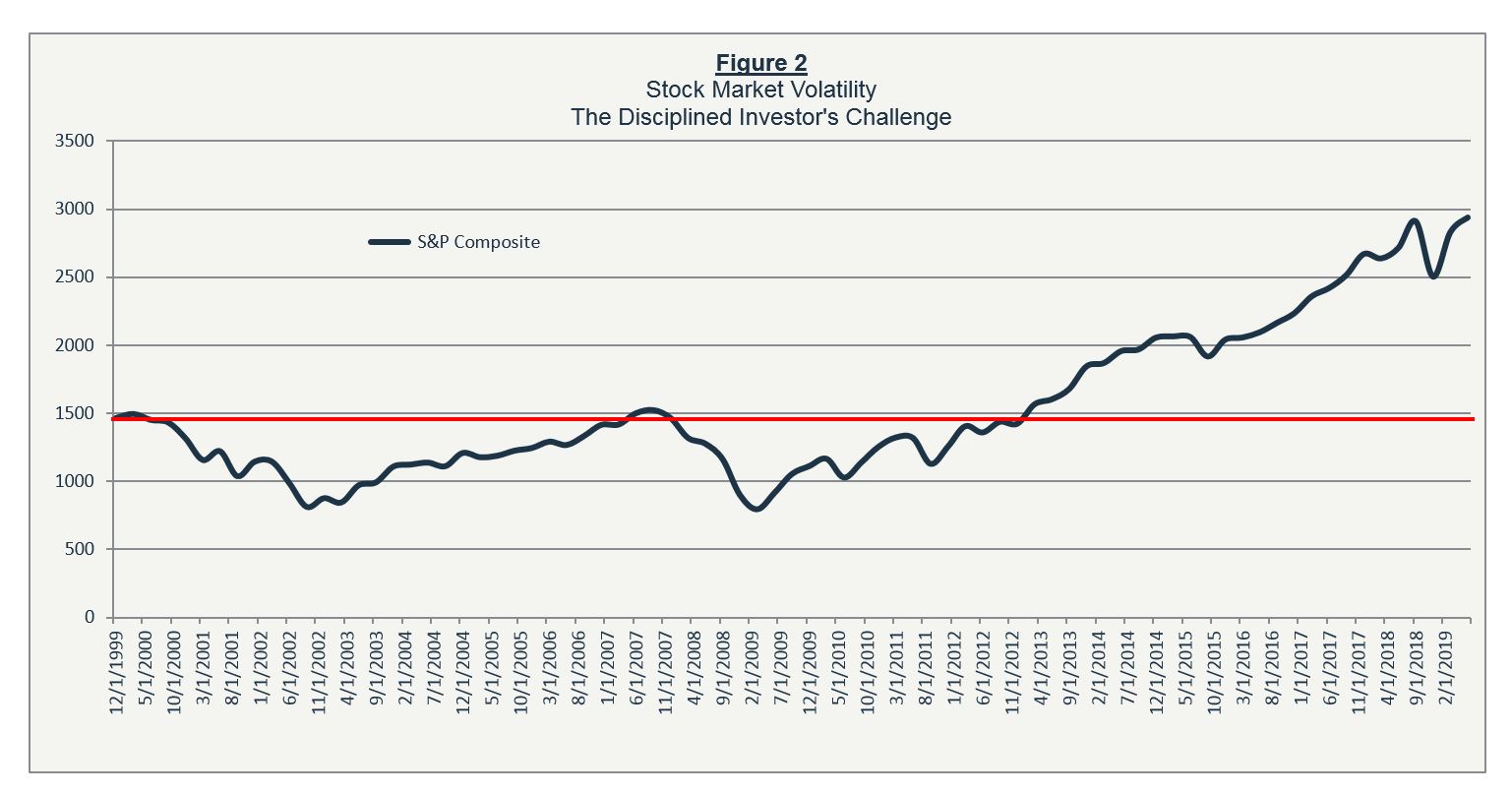 While we do not subscribe to a Modern Portfolio Theory approach to portfolio construction, important lessons can be gleaned by a look at the historical tradeoff between volatility and returns.  Here we dive into a Strategic Asset Allocation (SAA) simulation to review this relationship.2

SAA’s underlying objective seeks to balance risk tolerance with return goals by regular rebalancing to maintain diversification within a narrow range across asset classes.  There are a lot of ways to measure risk, of course.  At Boston Research & Management, our preferred definition of risk is the permanent loss of capital.  Another definition, mentioned earlier in this piece, is relative risk (i.e. underperforming a benchmark).  From a statistical standpoint, SAA defines risk as standard deviation, which measures how tightly a data set is clustered around its historical average.  The greater the dispersion, the greater the risk.

To see the point, imagine two stocks with 10% average annual returns.   Assume one had a range of outcomes between 8% and 12% while the other’s fluctuated between 0% and 20%.  Investors would be concerned about the sizable difference.  In this arena, volatility is risk.

It is important to recognize that no single configuration fits all investors or even the same individual at different stages of life.  Investment returns and goals are ever-changing, and timeframes are a major factor as well.  Portfolios with long-term horizons, for example, ought to be remarkably different from those with shorter ones.  It’s a safe bet that investors looking to access their nest eggs in the near-term prize the return of their capital more than their return on it realizing that the stock market could suffer a meltdown just when they can least afford it.  So remember, allocations need to be revisited regularly to ensure proper alignment with each investor’s circumstances.  Let’s take a closer look.

Figure 3 depicts the return/volatility profiles for major asset classes (red markers) together with three simulated SAA portfolios.3  The scatterplot allows us to pair up each investment’s historical average return (vertical axis) with its standard deviation (horizonal axis).  Hence the point labelled “TBills” (a cash equivalent) lines up with a 1.75% return and a standard deviation of 1.72%.

Now surf the curve and observe how the risk factor increases as the portfolio mix tilts in favor of equities and diminishes as it shifts toward lower yielding bonds and Tbills.  Hardly a surprising result.  While markets are not always efficient, over the long run, greater risk generally begets greater reward.

What’s the optimal allocation?  As mentioned earlier, the answer varies from investor-to-investor.  Those approaching retirement, for instance, might favor a conservative allocation with modest stock market exposure (Simulation B).  After all, since the turn of the century, the S&P lost money in 4 of the last 19 years. On the other hand, newly minted portfolios with long horizons might be well served by a more aggressive equity allocation (Simulation C).  As Edgar Lawrence Smith put it a century ago:

"Each class of investment has its useful purpose and its proper place in any investment plan. A clearer understanding of their differing attributes may help to determine the relative proportion…which will best serve the investment requirements and purposes of each investor.” 4

1 Relative risk is defined as the odds of underperforming an equity market benchmark (e.g., the S&P 500 Composite) while absolute risk is the probability of suffering a negative return.

3 In practice, there are innumerable combinations. The three simulated portfolios presented here are intended to illustrate the expected incremental return over time of higher equity allocations.