In late February, when the COVID-19 Corona virus was just beginning to take hold in the United States, we wrote about the unprecedented volatility this public health crisis was creating in financial markets, pressing stock indices into “correction territory” and benchmark Treasury yields to near-record lows. We wrote of the possibility that, because of the virus, corporate earnings could fail to reverse broad downward trends, prolonging an “earnings recession” that began in mid-2019, a stark contrast to the notable rise in market valuations that defined much of the last two years of the past decade. We also wrote that such unprecedented levels of volatility could expose opportunities to capture value, echoing Warren Buffett’s well-known adage, “Be fearful when others are greedy and greedy when others are fearful.”

Our last update, though written just weeks ago, feels years old given how different the world is now compared to that at the start of the year. Since that time, the record-long bull market that followed the Great Recession swiftly and definitively ended, despite the S&P 500 reaching an all-time high on February 19th (from which it fell some 34% at its lowest point). In response to emerging economic weakness, the Federal Reserve abruptly cut its target short-term interest rate (the “Fed Funds Rate”) to zero1 and embarked on a quantitative easing program rivaling that of the Financial Crisis. This program parallels an even larger stimulus package from the federal government that includes broad relief for small businesses and supportive transfer payments to tens of millions of Americans. And while the S&P suffered through multiple days of jarring, double-digit percentage declines, stocks began a rally in late March that has continued into April, leaving the market down just 12% year-to-date2, or roughly where we were in June of last year. (Figure 1). 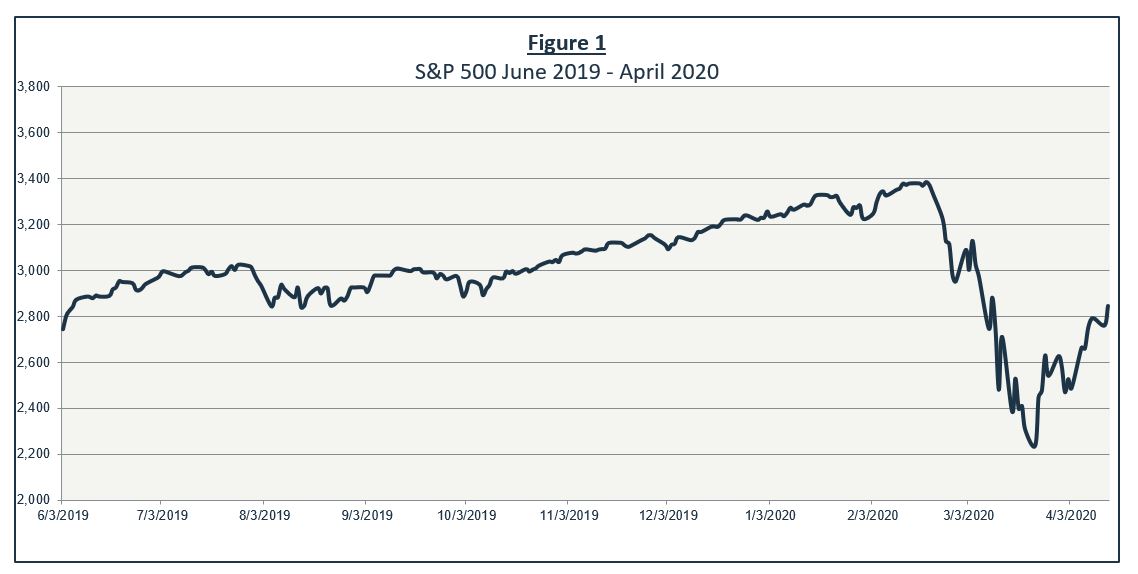 Though at least one quarter of the US economy remains shuttered amid widespread stay-at-home orders (currently in place in 80% of US counties3), Wall Street pundits and market strategists have begun to speculate whether we are nearing a “market bottom,” a catch-all term that has historically served as the signal for market participants to begin resumption of their normal course of investing. Many associate a market bottom with a precise event at a specific time—the S&P 500’s intraday low of 666, reached on the afternoon of March 6, 2009, is certainly etched in the minds of Wall Street veterans, as is the index’s closing low of 676 on March 9th, which marked the official start of the new bull market. Yet, more thoughtful analysis has shown that the market’s pivot into a recovery may be more accurately viewed as a process, where the concept of a bottom may be important but the exact timing is not. To paraphrase renowned value investor Howard Marks of Oaktree Capital in one of his recent letters to his investors: we cannot know today if a bottom has been reached, for that depends on what happens tomorrow.4 Without the ability to predict the future, trying to gauge the timing of a bottom is an impossible exercise, one that has become even more muddled in our current circumstance in part due to a constant deluge of new data—from new COVID-19 models to government stimulus to supply shortages and much more—but also due to a lack of other crucial data, such as corporate earnings and official unemployment and GDP figures. This paradox leaves investors operating with only part of the full picture and, in our opinion, quite a few tools short of being able to accurately pinpoint a market bottom.

However, we do see that the market’s gears are turning, that the data is at least being digested and processed, and that we may be passing a period of peak uncertainty, one that was defined by moments of sharp panic-selling and freefall-like sentiment as market efficiency briefly ground to a halt. In the process of reaching a bottom, achieving some sense of calm is an important first step, and barring a second wave of COVID-19 cases or major uptick in fatalities, we are hopeful that the worst of these panicked moments may be behind us. The Federal Reserve’s swift and substantial intervention over the past month has also injected confidence in a way that was absent in the early stages of the stock market crash in 2008, employing a “do whatever it takes strategy” that some strategists believe limits downside risk in equities. At the same time, stepping up to the plate as a buyer in the market is still difficult, largely because we are just now entering the next phase of the bottoming process: assessing the consequences of this unprecedented global shutdown.

Indeed, the full scope of COVID-19’s impact on the world may not be fully understood for years, if ever, but we may soon get a glimpse in the upcoming earnings season, which is just now beginning in earnest. The corporate financial data to be reported for the first quarter of 2020 will include roughly a month of operations impacted by COVID-19 and may put to paper some of the fears the stock market began pricing-in throughout March. Through these reports, investors will be able to begin evaluating whether reality has matched expectations, providing the insight necessary to form equity valuations, which will in turn help shape a broader market outlook. This will by no means be a quick process; earnings data for the second quarter (ending June 30th) will likely be even more critical, including at least one additional month of full lockdown conditions and (hopefully) the beginning of a return to normalcy. However, first quarter results will provide some much-needed fundamental grounding for investment decisions, potentially granting some value opportunities amid the rubble for those looking carefully with a narrow scope. Undoubtedly, though, investors will need even more data (and time) before the “all-clear” can be sounded and the bottom marked with certainty; there is still so much we do not know about COVID-19’s impact—particularly on the macroeconomic side, which will take months to surmise—that prevents us from adequately reaching conclusions. Comparatively simple charting and technical analysis is no substitute for thorough economic and financial research at a time like this, especially one where many historical trends and assumptions have been broken.5 The bottoming process also often lends itself to temporary bounces, or false bottoms, and it is possible that we may currently find ourselves in such a moment, as was the case in October 2008 when the S&P 500 rose more than 10% on two separate occasions, nearly five months before the official March 2009 bottom. (Shaded areas in Figure 2). Improving news on the virus front, along with unprecedented fiscal and monetary support, has alleviated some selling pressure, but the market remains on “pins-and-needles” as data continues to flow in. 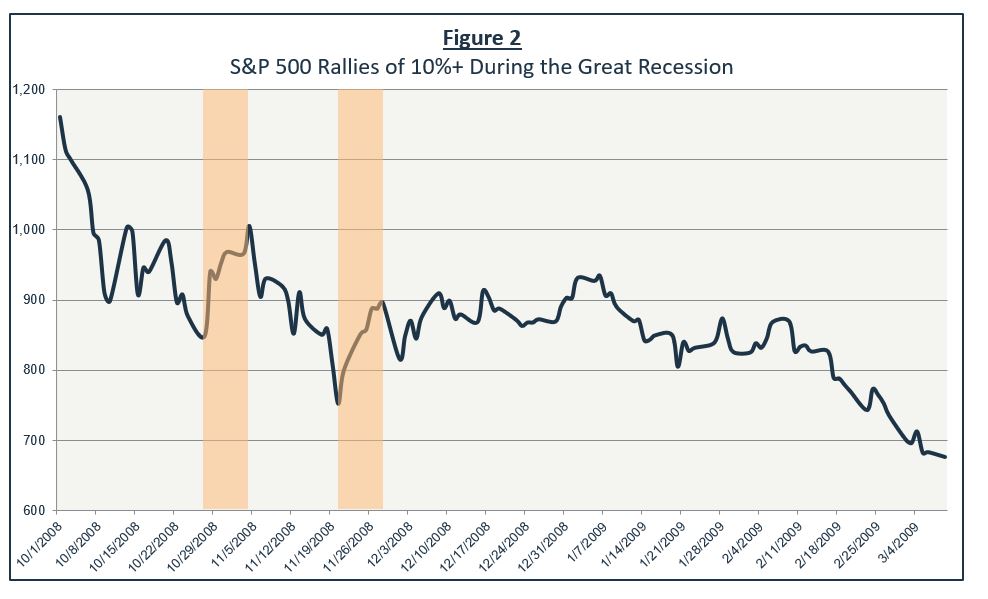 Further market drawdowns are always possible, a risk that comes with forming overly optimistic expectations too early on, but which may give way to more opportunities as well. The bottoming process will run its course, and, more important than knowing when the process will end, is knowing that it is occurring. The market cannot flip instantaneously like a light switch, nor should it be expected to, which is why we have never been advocates of market timing, and now is no different. A measured course of investment with a healthy dose of caution will eventually prevail through these trying conditions, and with the potential for better-than-expected earnings announcements on the horizon, opportunities to invest in undervalued companies with strong, durable businesses should begin to appear, slowly but surely, and likely well-ahead of a broader market recovery.

5 Pundits have already termed the COVID-19 outbreak and, perhaps more aptly, the global shutdown and subsequent market volatility as a “black swan event,” or one of extreme rarity with unpredictable outcomes.