“Basically, price fluctuations have only one significant meaning for the true investor. They provide him with an opportunity to buy wisely when prices fall sharply and to sell wisely when they advance a great deal.”

As we have written before, volatility can—and often does—jarringly grip markets, particularly when complacency has been the prior norm. Unlike other market risk factors, extreme price movements tend to trigger emotions, and in this arena, emotions are a hazard. When stocks fall, fear often takes over and talk of a looming recession inevitably intensifies. The second quarter of 2022 proved to be one such period, as the market shed nearly all gains earned over the last year (Figure 1).1 What’s more, the S&P 500 fell a whopping 20.6% in the opening six months of the year, its worst first-half performance since 1970.

So, what can be made of the market’s performance? Is it already “pricing-in” a recession? While omniscience is not part of the human condition, there fortunately may be some tell-tale signs of what lies ahead embedded in market and economic data—no crystal ball needed.

Though history never repeats exactly, the market’s reaction to changing economic conditions often resembles the past, forming discernable patterns. From these repeating phenomena, it may be possible to extract useful information and harness it to good advantage. For instance, the unemployment rate typically spikes at the onset of an economic downturn, exceeding its average level over the prior 12 months. Back testing shows that every recession in post-war history (the orange-shaded areas in Figure 2) corresponded with the unemployment rate (the solid blue line) rising above its 12-month moving average (the dotted blue line). Without fail, this scenario has proven to be a coincident—if not leading—indicator of economic downturns.

Empirical evidence lends veracity to other statistical indicators as well. Perhaps the most well-known sign of economic stress is an inverted yield curve, with the difference between the 2-year Treasury and 10-year Treasury being the most common measure. In a normal interest rate environment, longer-dated securities beget higher yields, with the 10-year rate predictably expected to be higher than the 2-year rate (a positive spread). When the opposite is true (a negative spread), it could be a sign of potential economic instability. Like the unemployment rate, the yield curve’s track record as an economic indicator is impressive; over the last 50 years, every recession2 has been preceded by an inversion of the 10-year and 2-year Treasuries (Figure 3). As a market price-based indicator, the yield curve also partly captures investors’ own expectations, which can be telling signs unto themselves.

Another simple economic indicator combines two key data series—namely the unemployment rate and inflation—to inform whether the economy might be “overheating;” that is, nearing the upper limit of the economic cycle. Above average inflation and below average unemployment tend to correspond with peak economic output (as measured by Gross Domestic Product), whereby continued near-term growth may no longer be sustainable without a “reset” period (i.e., a recession). One theory purports that every time the unemployment rate has fallen below 5% while inflation (as measured by the Consumer Price Index) has simultaneously risen above 4%, the economy has entered a recession within two calendar years. Putting that to the test, analysis shows a connection between these factors and economic growth. Throughout post-war history, each incidence of these conditions being satisfied has correctly signaled an upcoming recession with an average “lead time” of 14 months (Figure 4).3 True, not every recession has been preceded by this signal—only 7 of the last 12—but there is hardly an economist with a better track record.

Armed with an ever-growing amount of data, today’s investors are more empowered to make informed decisions than at any other point in history. Yet, when faced with the possibility of a recession, many investors still make money-losing decisions. But why?

As we alluded to in our May client update,4 market volatility generally lacks discretion. “The good often gets tossed out with the bad” as fear takes over, hurting all market components regardless of true fundamental strength. In addition to selling investments with weak underlying fundamentals, investors often shed genuinely good investments with strong fundamentals amid a rush for the exits. However, this can be a costly mistake in the world of compounding returns. Over the course of market history, corrections and recessions have always been relatively short-lived. Long-term, upward momentum is typically much more durable. Furthermore, it is important to remember—particularly in anticipation of a recession—that the market is forward-looking. With the major equity indices down double-digits year-to-date, it seems possible that the potential for a recession has already been priced-in.

In a way, economic indicators sometimes only serve to confirm existing market sentiment. Even when examining the arguably most reliable of our aforementioned indicators—the relationship between the unemployment rate and its 12-month moving average—equity market returns have generally been positive in the months leading up to and following each time the unemployment rate has crossed above its moving average (the so-called “inflection point”) (Figure 5). 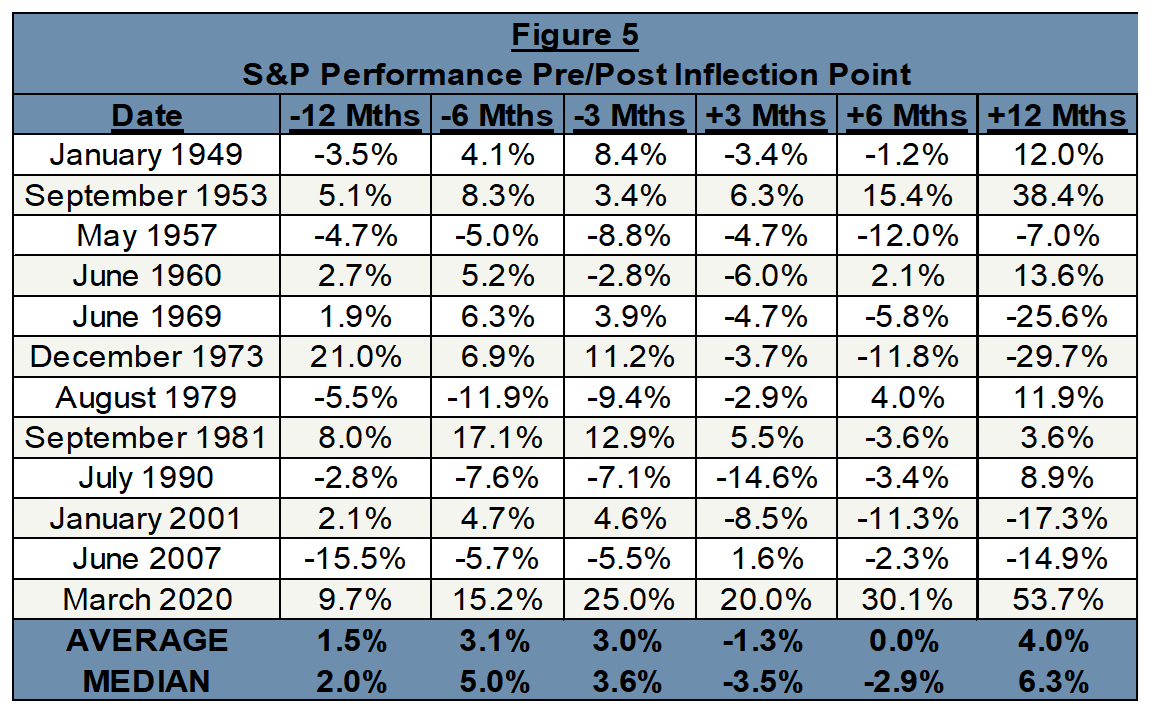 So, while these statistical indicators may provide useful insight into the near-term direction of the economy, their connection with actionable market strategies is generally limited. Additionally, as of quarter-end, only one out of the three signal the possibility of a recession—with unknowable timing—thus making substantial portfolio shifts in response to that signal imprudent. Instead, because periods of market volatility and economic uncertainty often give way to opportunity, the best course of action may to be seek out high quality companies trading at discounted valuations, while maintaining a healthy reserve of “dry powder” in the form of cash and safe, short duration fixed income instruments—the latter of which is finally offering above-zero interest rates. In essence, now might be the opportune time to go bargain hunting—while fewer market participants are looking. At the very least, those paying attention to market signals won’t be caught flat-footed when the music stops.

2  Though not shown in Figure 3, which uses monthly periodicity, the 10-2yr. spread did briefly turn negative for three days in August 2019. Six months later, the US entered a recession lasting approximately one quarter.