While 2019 was a strong year for stocks in general, a closer look shows that the market was led by the Tech, Communications Services, and Financial sectors, which carried much of the burden, while others like Energy and Health Care lagged. Investors stomached a fair amount of uncertainty throughout the year, coming off a correction in late 2018 that saw a double-digit drawdown of the S&P 500, a rarity amid the solid bull market enjoyed by investors over the past decade. With the bar lowered going into 2019, those investors who had been patient during the prior year’s run-up were able to find opportunities in the rubble, and the subsequent first quarter rally1 ended up front-loading much of the S&P’s gains for the year (Figure 1). 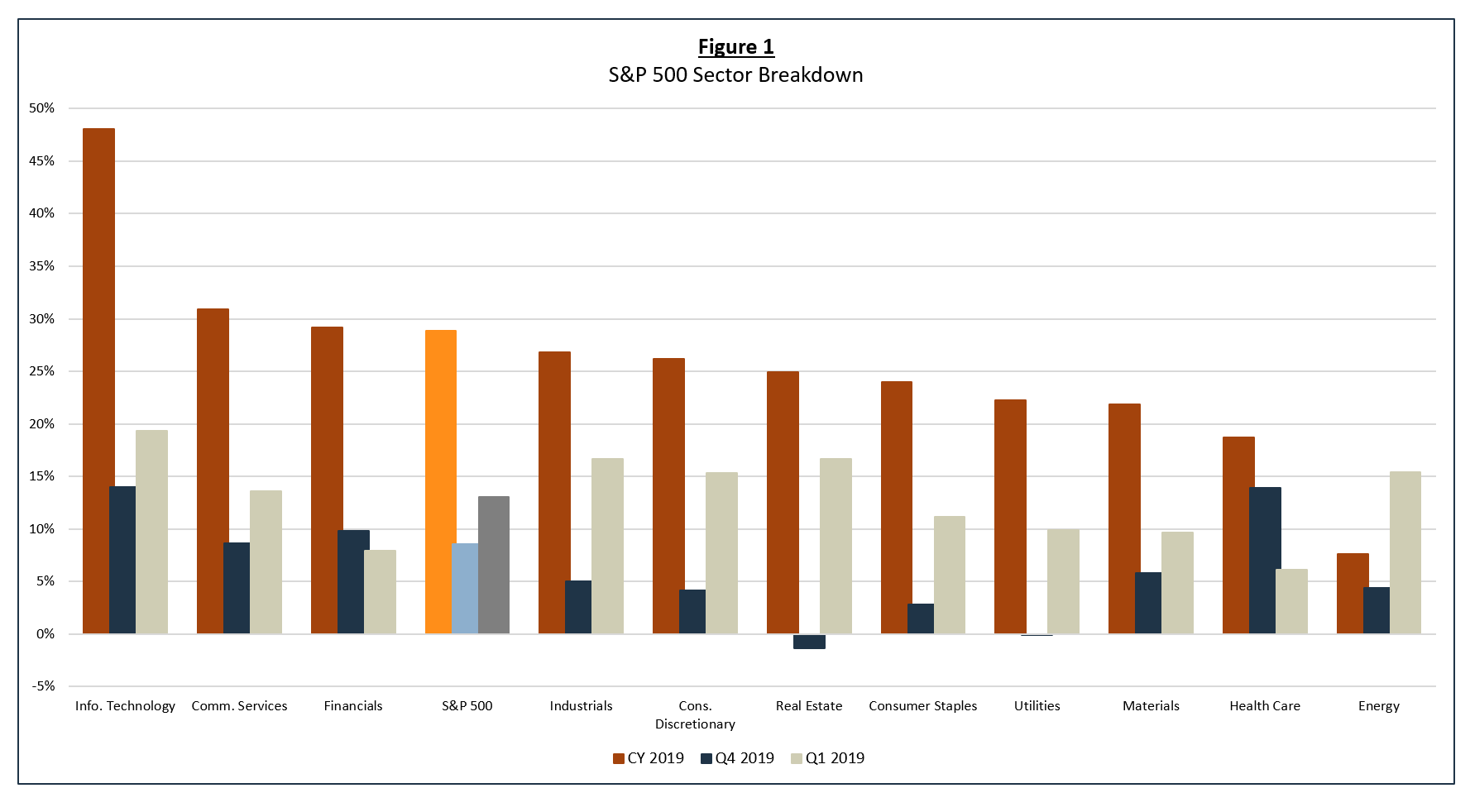 However, the road to a near-record year-end was not entirely smooth for all sectors; Energy had a particularly difficult year despite its strong start, weighed-down by stagnant oil prices that failed to react to a number of geopolitical events which, based on historical norms, should have been highly disruptive. In a typical year, supply disruptions in Venezuela or escalating tensions with Iran would have individually been enough to put lasting, upward pressure on oil prices, but the market’s reaction was surprisingly muted. Such a response was even more notable in September 2019, when oil prices soared by a historic 15% overnight after an attack on Saudi Arabian oil assets by Iranian-backed rebels in Yemen took one-third of the kingdom’s production capacity (equivalent to 5% of the world’s supply of crude) offline, only to fall back to pre-attack levels less than two weeks later. All told, global oil prices finished 2019 down roughly 20% from their recent peaks in October 2018 and spent much of the year rangebound between $60 and $70 per barrel (Brent crude prices).

In natural gas markets, another major driver of the Energy sector, excess supply and relatively mild weather across the country sparked a severe downturn in prices going into the first month of 2019 and lasting well into mid-year, further weighing on energy stocks. Warmer weather also brought significant snowmelt and rain to the Midwest, causing devastating flooding throughout the farm belt that disrupted the spring planting season and added insult to injury for farmers and agriculture-tilted Industrial stocks already grappling with the negative effects of tariffs and the trade war between the US and China. A lack of progress on the trade front also made for a middling second half of 2019 in the Industrials sector, and earnings are expected to decline in the fourth quarter as the effects of trade tensions and the potential for a global industrial slowdown feed through to companies’ top and bottom lines (Figure 2). The Industrials sector was not the only earnings laggard in 2019 either—far from it actually. Net income also declined across the Energy, Materials, Tech, and Consumer Discretionary sectors toward the end of the year, culminating in an effective “earnings recession” within the S&P 500, whereby the index’s cumulative earnings fell for two consecutive quarters.*

*Fourth quarter results are based on current consensus estimates. Data from Bloomberg.

Pressure was not universal, however. Both Financials and Utilities posted decent earnings growth and even stronger price returns in 2019, aided in part by three cuts to the Federal Reserve’s target rate (“the Fed Funds rate”)2 that eased interest paid on deposits and the cost of borrowing, the latter a boon for debt-heavy utilities and bank loan demand. A notable pivot in strategy among institutional banks like Goldman Sachs and J.P. Morgan, which began to emphasize consumer banking and wealth management divisions to a greater degree than ever before, also provided some diversification and support to their top and bottom lines. Consumer Staples also managed to largely evade the negative effects of a dicey trade environment, with household names like Procter & Gamble, General Mills, and Walmart posting profit and share price gains on the back of solid consumer spending while demonstrating some restraint in passing along price increases to customers, which kept demand stable. Apple (also a ubiquitous consumer brand but not quite a staple) was another example of a company that showed restraint in passing the cost of tariffs on to customers, even though most of the company’s products were taxed in some way. Apple was also able to curry some favor with the Trump administration, which at one point considered exempting the company from additional levies before tariff hikes were paused altogether.

2019 was also a volatile year for the IPO market, one that ultimately turned out to be disappointing for many investors. In practice, an emphasis on quality and value, a key component of our style of disciplined investing, could have spared speculators some of the pain from the questionable, frothy valuations that failed to hold up against sector-agnostic declines throughout the second half of year (Figure 3).

*Due to the varying starts dates of these IPOs, performance is measured from the end of 2Q 2019 onward.

Years like 2019 highlight the importance of a long-term investment approach grounded in solid company fundamentals. While a rising tide may have lifted most ships last year, this is not always the case, and it is all too easy for investors to get caught up in momentum while underlying conditions deteriorate. While we do not necessarily believe 2019’s earnings recession spells the end of the decade-long bull market, it is worth noting that steps and stumbles do occur along the way, and that trying to time the market’s short-term reaction to geopolitical events, business cycles, Fed decisions, and other transitory headwinds is often more detrimental than it is potentially beneficial.

1 In Q1 2019, 91% of the companies in the S&P 500 posted positive price returns, with nearly half achieving returns in excess of 15% for the first quarter alone.

2 These rate cuts, the first in over a decade, followed nine incremental increases that raised the Fed Funds rate from near zero, where it had sat from 2009 through 2015.