Anyone with an eye on the financial markets will know that stocks have been on a tear over the past year, largely unfettered by the pandemic. As a result, all major benchmarks have achieved strong double-digit gains since the beginning of 2020. (S&P 33.0%; DJIA 20.9%; NASDAQ 61.7%).1

As equity markets continue to push deeper into positive territory, it is only natural to wonder how long this momentum might last. It is also fair to question whether prices are keeping pace with reality or if valuations are a bit stretched. While these questions may come easily, the tough part is actually assessing the market’s prospects. After all, there is no magical statistic, analysis, or model capable of encapsulating all possible outcomes. Though that may be a handicap, there is a time-tested way to evaluate the stock market’s intrinsic value: the price-to-economy or “P/Ec” ratio.2

Just as Wall Street has long relied on the familiar price-to-earnings (“P/E”) ratio to evaluate the share price of individual companies, the P/Ec ratio provides the same perspective for the general stock market. Much like the P/E ratio, the P/Ec ratio takes the price of something—in this case, the economy, as measured by the total market capitalization of the New York Stock Exchange—and divides it by underlying profits/earnings. Here, we approximate the “earnings” of the US economy using Gross Domestic Product.3

A simulation illustrates the ratio’s usefulness in guiding asset allocation decisions. Imagine a fully invested S&P 500 index fund. Absent trading activity, portfolio performance would mimic the S&P (adjusting for any associated costs). As a passive index fund, there is no opportunity for enhanced returns. Now, add a tactical asset allocation (TAA) overlay to the strategy that allows portfolio assets to switch between two asset classes—equities (the S&P) and cash equivalents (T-bills)—each quarter. Whenever a top-heavy market is indicated (observations above the dark blue upper band in Figure 2), the TAA would target cash equivalents. But when the danger subsides, assets would be reallocated to equities.

Remember, during periods when the TAA portfolio holds riskless T-bills, it effectively cannot lose any principal. Of course, meaningful inflation could impact purchasing power, but the portfolio is immunized against equity market volatility. However, with a portfolio consisting entirely of cash equivalents, there is still the “relative risk” of underperforming the S&P. On the flip side, when the TAA targets stocks, relative risk is eliminated, but “absolute risk”—the chance of losing principal—is introduced. As such, the only way for the P/Ec portfolio to earn an excess return is by avoiding stock market downturns – a tall order. So, how has the TAA’s performance, as dictated by the P/Ec ratio, panned out historically? Fairly well, in fact. As detailed in Figure 3, the methodology generated a superior return over the S&P and T-bills alone during our 21-year lookback period. 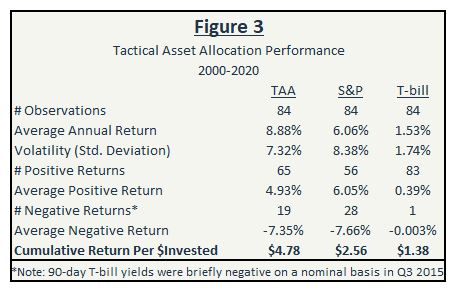 Much of the TAA’s outperformance is attributable to its lower volatility (as measured by standard deviation) compared to the S&P, as well as fewer periods of negative returns and a smaller average drawdown when losses do occur. Using the signals from the P/Ec ratio, the TAA appears to have been largely successful at avoiding “outlier” quarters with exceptionally poor equity performance, producing a higher cumulative return at the end of our simulation. That said, while the ability to rebalance entire portfolios on a quarterly basis is appealing in theory, the associated tax ramifications often make doing so impractical and would chip away at any excess return that could be captured. Of course, we recognize that each investor’s situation is unique, requiring prudent, tailored decision making. The P/Ec ratio is just one tool that helps illustrate the usefulness of focusing on valuation concepts when deploying capital.

So, what does the P/Ec ratio have to say about the market in 2021? With just two quarters of data available thus far, the P/Ec has twice signaled a move to T-bills: once at the end of Q4 2020 and again at the end of Q1 2021. Obviously, having followed the Q4 2020 signal in setting Q1 2021 allocations would have been a mistake—the S&P returned a solid 5.77% in the first quarter of the year against a measly 0.03% annualized yield on T-bills. The same rang true in Q2 2021 as well, when the S&P returned 8.17% versus 0.05% for T-bills. Still, there is value in acknowledging what the P/Ec might be trying to tell us. “Expensive” markets with above-average valuations are particularly susceptible to sudden selloffs when bumps in the road come along, especially if complacency has been the prior norm. In such markets, participants are often quick to react, selling equities en masse without regard to company-level fundamentals.

As a result, while we may not be eager to plunge headlong into a broad market index at present, we remain on the lookout for companies with strong, durable businesses trading at reasonable valuations and are confident that a long time horizon will shake out any transitory market jitters that could arise. Additionally, GDP—the “earnings” in the P/Ec ratio—is expected to grow much faster this year than in any other period over the last two decades, which the market may be “pricing-in” ahead of time. If GDP materializes as expected, valuations may prove not so lofty after all and we could see a reversion of the P/Ec ratio back into fairly-valued territory, a bullish sign for stocks. Now is the time to revisit equity allocations to ensure portfolios are appropriately protected should volatility return, but also sufficiently stocked with “dry powder” to take advantage of any opportunities in the offing.

2 For a discussion of the P/Ec ratio and its practical application, see Charles E. Babin and William J. Donovan, Investing Secrets of the Masters. McGraw Hill (1999), Chapters 8 & 10.

3 By official definition, Gross Domestic Product (GDP) is the sum of incomes generated by the economy, of which corporate profits is a key component. GDP data are released quarterly by the Bureau of Economic Analysis, allowing P/Ec ratio calculations on the same frequency. When interpreted in the context of its historical range, the ratio provides an approximate measure of the economy’s “earnings” to get a rough idea of whether the market is “overvalued” or “undervalued.”