Savvy investors don’t just worry about returns. What keeps them up at night is uncertainty over the rate of return that may—or may not—materialize given the uncontrollable, unprecedented, and even previously unimaginable Covid economy. Certainly, prudence dictates that return objectives be balanced against the risk of achieving them—a daunting task given today’s environment. Let’s take a closer look.

By and large, when the virus first cropped up in late 2019, the potential for devastation resoundingly rattled the markets. So, it was not surprising that even seasoned investors abandoned stocks when the S&P shed 20% of its value during the first quarter of 2020, marked by an intra-quarter peak-to-trough decline of roughly 34%. It was a big mistake; share prices more than recovered from their early 2020 losses and closed out 2021 with massive cumulative gains. Measured from the end of 2019, the S&P’s cumulative total return was a whopping 47.5%, while the DJIA and NASDAQ delivered 27.3% and 74.4%, respectively.

In 2021 alone, the S&P rose nearly 27%—its third best year since the turn of the century1—indicating investors must have at least some confidence in the post-pandemic recovery. But what does this mean for the economy in 2022?

Clearly, market participants have an incentive to “get it right;” their hard-earned cash is on the line. From this perspective, it is reasonable to assume that market prices reflect investors’ convictions. The challenge is to find a way to extract this information and harness it to good advantage.

Using simple statistical tools, historical market data can be used alongside ex-post Gross Domestic Product (GDP)2 figures to help inform economic forecasts. Because markets are inherently forward-looking, they can provide useful insight into where the economy may be headed for the coming year. As of now, consensus estimates3 see 2021 GDP growth coming in at 5.60%, which would be the fastest rate of growth since 1984. Considering its impressive performance last year, the market appears to imply that 2022 GDP could be equally as strong.

Now, while two consecutive years of supernormal GDP growth is not the norm, it is not all that uncommon either; post-WWII, annual GDP growth has exceeded its ~3% average in two or more consecutive periods one-third of the time. Though the odds are generally against back-to-back blockbuster years, market participants seem to think it is possible, if not likely, in 2022. 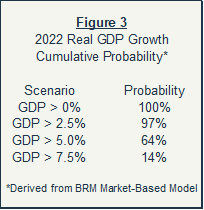 Of course, it is fair to incorporate some margin for error, in that GDP growth might not quite break the 5% level twice in a row. That is much rarer, occurring just four times in post-war history.4 However, analysis suggests it could happen again this year. At the very least, all signs point to another year of robust economy activity ahead, and the pundits seem to agree. 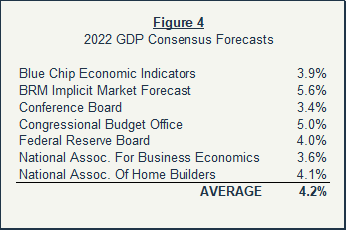 Though it can sometimes seem irrational, there is intelligence embedded in the market’s performance, the so-called “collective wisdom” of investors. Taken as a whole, equity markets can provide unbiased data points that should be taken into consideration when making an investment, as removing emotion from the decision-making process is paramount to success. Undoubtedly, emotions got the best of investors who sold into 2020’s weakness, only to miss out on the remarkable gains that followed. In such situations, the value of balanced, fundamentally driven strategies truly shines. While we never recommend investing on blind faith, a solid macroeconomic underpinning should give credence to investments in stocks with well-grounded fundamentals and attractive valuations.

Despite the initial challenges of this decade, the Roarin’ 20s might just have some momentum yet…

2 Official GDP is always measured after the close of the lookback period and is then revised to subsequent levels of precision.