Frequent flyers expect turbulence from time to time. It’s just part of the travel experience. By the same token, sensible investors are ever mindful that volatility will grip the stock market periodically. Though the timing, magnitude, and duration of a correction—defined as a decline of 10% or more—is always a mystery, seasoned players realize that opportunity exists amid all market conditions. Today is no exception.

Think back two years ago when Covid first cast its shadow across the globe and the S&P shed over 30% of its value during the opening quarter of 2020. Though nerve-racking, it would have been a mistake to quickly abandon equities at that time.1 That said, rising inflation and geopolitical tensions made for another challenging start to the New Year as broad market indices moved lower in the first quarter of 2022 (S&P -4.95%; DJIA -4.6%; NASDAQ -9.1%). But if history is a guide, it will pay to remain calm in the face of unnerving headlines.

Indeed, late-quarter performance marked an improvement from the first two months of the year, which both endured relatively steep market declines. By the end of February, the S&P and Nasdaq entered correction territory, with the Nasdaq briefly touching a “bear market”—a decline of at least 20%—during the second week of March. Should the low reached at the close of business on March 8th hold, the S&P’s most recent correction will have lasted 64 days, covering a peak drawdown of 13%. Yet, the S&P ended the quarter some 8.6% above this nadir and less than 6% away from its all-time high, set on January 3rd. In many cases, corrections can happen in a flash. But the market can also recover nearly as fast, rewarding level-headed investors that stay in the market and penalizing those whose emotions overwhelm their ability to remain calm and objective. Ultimately, corrections are a normal part of healthy market cycles and should not be feared. Between 2000 and 2022, there were nine notable corrections on the S&P 500 (Figure 2). Every time, without fail, the market recovered. Is there reason to believe that this time might be any different? Not likely. 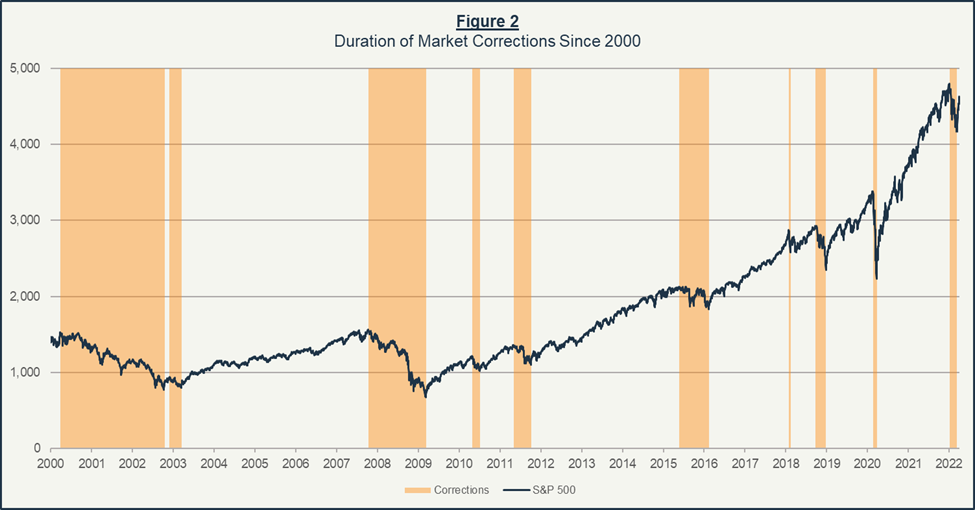 Of course, each percentage decline requires a proportionally greater percentage gain to “break even.” For instance, a 50% drawdown necessitates a 100% gain to fully recoup losses. That’s just simple math. But for investors in the midst of a correction, many might assume such a recovery is impossible, at least in a reasonable amount of time. They would be wrong.

While it may seem hard to believe, the market has, on average, fully recovered from each correction in just over a year’s time. The median recovery—which helps adjust for outliers like 2000 and 2007 by taking the “middle” value of the data set2—took roughly five months to reach breakeven. In total, the median duration of the full peak-to-trough-to-recovery cycle across every correction since 2000 was only 215 days. In the context of a long investment horizon, these events are a mere blip on the radar.

So, what lessons can we derive from this information? Perhaps most obvious is that it has historically not been a profitable endeavor to bet against the broader market. While corrections may produce brief short-selling opportunities, the market’s overwhelming trend has been one of upward momentum. Furthermore, it is important to remember that trying to “time” the market is most often a futile exercise. During periods of volatility in particular, market participants are generally better off doing nothing. After all, statistics reinforce the idea that a well-diversified portfolio should always come out ahead given sufficient time. Patience is a virtue.

Corrections also give investors an opportunity to revisit equity allocations, which can be appropriately expressed as a range. As an investor’s perception of risk rises, equity allocations can be modestly decreased to the lower end of the range. As risk fades, allocations can then be increased toward the top of the range. But the investor is never fully uninvested, and allocations should be adjusted in an orderly manner based on well thought-out analysis and preferences, not hair-trigger reactions. Much like bumps in the road on a cross-country trip, market corrections are unavoidable. But similar to a luxury automobile, the quality of an investment portfolio can be likewise measured by how well it “absorbs” these bumps, mitigating the impact. Those of the highest caliber should be expected to reach their destination unimpeded.

2 Compared to the arithmetic mean, which sums up the values in a data set and divides it by the number of observations to reach an “average” value, the median represents the observation at the exact midpoint of the data set; 50% of other observations are above the median and 50% are below. This has the effect of “normalizing” outlier observations—those at the extreme low and high ends of the observed range—that would typically skew the average.