Long dormant stock market volatility (large price changes over short periods of time) reasserted itself in the first quarter of 2018 and in the process wiped out a popular (but widely misunderstood) investment product – the now-defunct “VelocityShares Daily Inverse VIX Short-Term Exchange Traded Note” (ticker XIV). It was just a year ago when we wrote about the astonishingly low volatility at that time.1  Over the subsequent nine months as equity markets marched forward, volatility continued to set record lows.  Between March 31st and December 31st of 2017, the VIX Index (a popular measure of projected market volatility) steadily crept downward before reaching an all-time low reading of 9.14 on 11/3/17. During this period, an increasingly large crowd of investors grew to believe that market volatility had been vanquished for good and piled into the VelocityShares Daily Inverse VIX Short-Term ETN, an investment product that allowed speculators to bet that volatility would continue moving lower.

Cracks began to emerge in the market rally in late January after a slightly higher-than-expected wage growth number raised concerns the Federal Reserve would need to tighten monetary policy faster than expected to combat budding inflation. Within 10 trading days the S&P 500 experienced its first 10% correction since early 2014 and the VIX spiked to an intraday high above 50 before settling at 37. To put this in perspective, the last time the VIX closed above 50 was in late 2008 during the financial crisis. (See lower chart on the following page.)  The S&P 500, which had not even experienced so much as a 5% drawdown over the prior year, eventually closed the quarter 1.2% lower – the first quarterly decline in the index since 3Q 2015.

With 2017 as a major exception, market pullbacks are not uncommon in the grand scheme of things, but investment products imploding overnight are – and that is exactly what happened to the Inverse VIX Short-Term ETN. It is still not totally clear why this product lost more than 90% of its value in the first few days of February, and class action lawsuits are just forming to dig a little deeper on that question, but within days Credit Suisse (the note’s creator) was forced to close down the product. One theory even suggests that this ETN was not a victim of the spike in volatility but could have actually been one of the causes as speculators (mainly hedge funds) rushed to cover short volatility positions with short equity positions flooding the market with sell orders.

This anecdote highlights several pitfalls of investing we strive to avoid. First, there was herding behavior after the huge gains enjoyed in 2017 with the fund’s assets ballooning to $2 billion before its collapse. Next there was “conventional wisdom” where everyone just knew volatility was gone for good (“This time is different!”). Additionally, there was opacity in how this product was built and would operate in adverse conditions paired with investors who could not (or did not care to) understand those risks. We strongly believe in transparency and that investors should always know what they own.

So, what were the causes of the February selloff and renewed volatility? Strong nominees were: a) The inflation scare, which blew over quickly with subsequent data points (although it continues to be a concern of ours), b) the aforementioned selling pressure from hedge funds coupled with panicked investors selling index funds, which in turn liquidate stocks with no regard to their investment merit, c) concerns about a trade war with China and d) a renewed government focus on major tech firms which continued to weigh on shares through the latter half of the quarter. 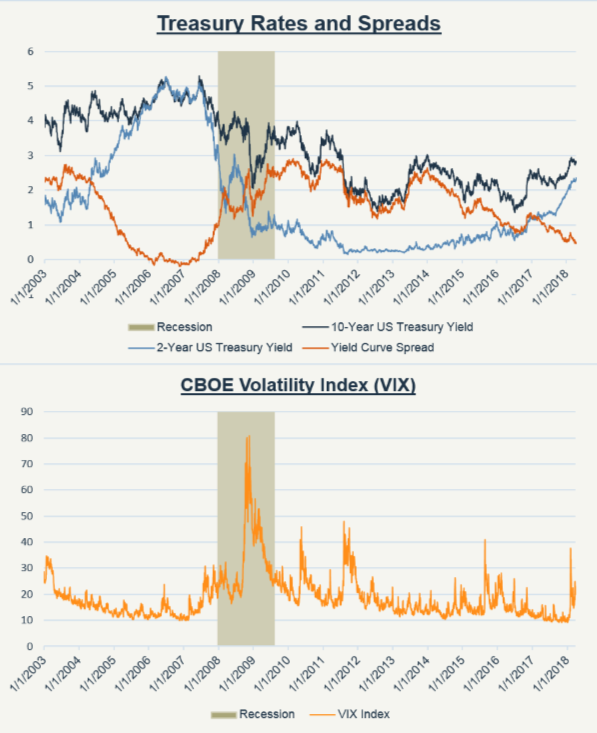 Consider the charts to the right.  We’ve stacked two concepts on top of each other, but with corresponding time periods (evidenced by the recession shading).  On top are Treasury Rates (dark blue for 10-Year, light blue for 2-Year).   The difference between these two rates is the Yield Curve Spread (orange line).  If this line is at zero, the yield curve is flat.  Anything less than zero, and it’s inverted.  So one can clearly see that the curve has been flattening since 2014, depicted by the declining orange line.  We’re not yet flat or inverted, but it is closer than we have been in years as it marches in that direction.

The lower chart shows the VIX index, or a measure of expected S&P 500 volatility.  Note the aforementioned spike in January 2018.

Volatility can be jarring, especially after such a sustained period of calm, but this was unique. Jack Bogle, the 88-year old founder of Vanguard, this past week said, “I have never seen a market this volatile, to this extent, in my career.” He quipped that his career is “only 66 years” but that period includes two 50% declines and one single-day decline of 25% and still he has “never seen anything like this before.”

What does all this mean for investors?  Well, it’s important to note that while many stock market pundits consider volatility to be a prudent measure (and often the sole definition) of “risk”, we share other beliefs.  We feel that volatility is simply a byproduct of owning any publicly traded entity whereby price is dictated by many people with varying levels of information, experience or rational behavior.   Risk, we feel, is better defined as “destruction of capital”.  When an investment implodes and goes to zero, it causes irrevocable damage to a portfolio, thus efforts should be focused on minimizing this occurrence.   The tools for minimizing volatility (diversified holdings) are different from those designed to eliminate capital destruction (fundamental research and analysis).