“You never get rich for long selling America short.”

After a decade of near-zero interest rates and a tripling of share prices, it's not surprising that Wall Streeters were spooked by ever-rising interest rates and nasty news headlines.  They shouldn’t have been.  Savvy investors are ever mindful that the stock market is punctuated by stretches of boredom with bursts of terror.  2018 was no exception.  Notwithstanding nifty gains through October, all of the market benchmarks finished the year in the red (the S&P -6.2%; DJIA -5.6%; NASDAQ -3.9%).

True, volatility is nerve-wracking.  But it’s normal.  Think about the “bull” market run from this angle. Measured from its 2009 low, the S&P increased by some 264 percent through the end of 2017.1  Convinced share prices would grow to the sky, investors were positively giddy.  Many threw caution to the wind and over weighted equity allocations.  It was a mistake.  Extrapolation is a portfolio killer, especially at inflection points in the market cycle.  Had they stretched out their time frame further, say back to 2000, they may have been more disciplined. 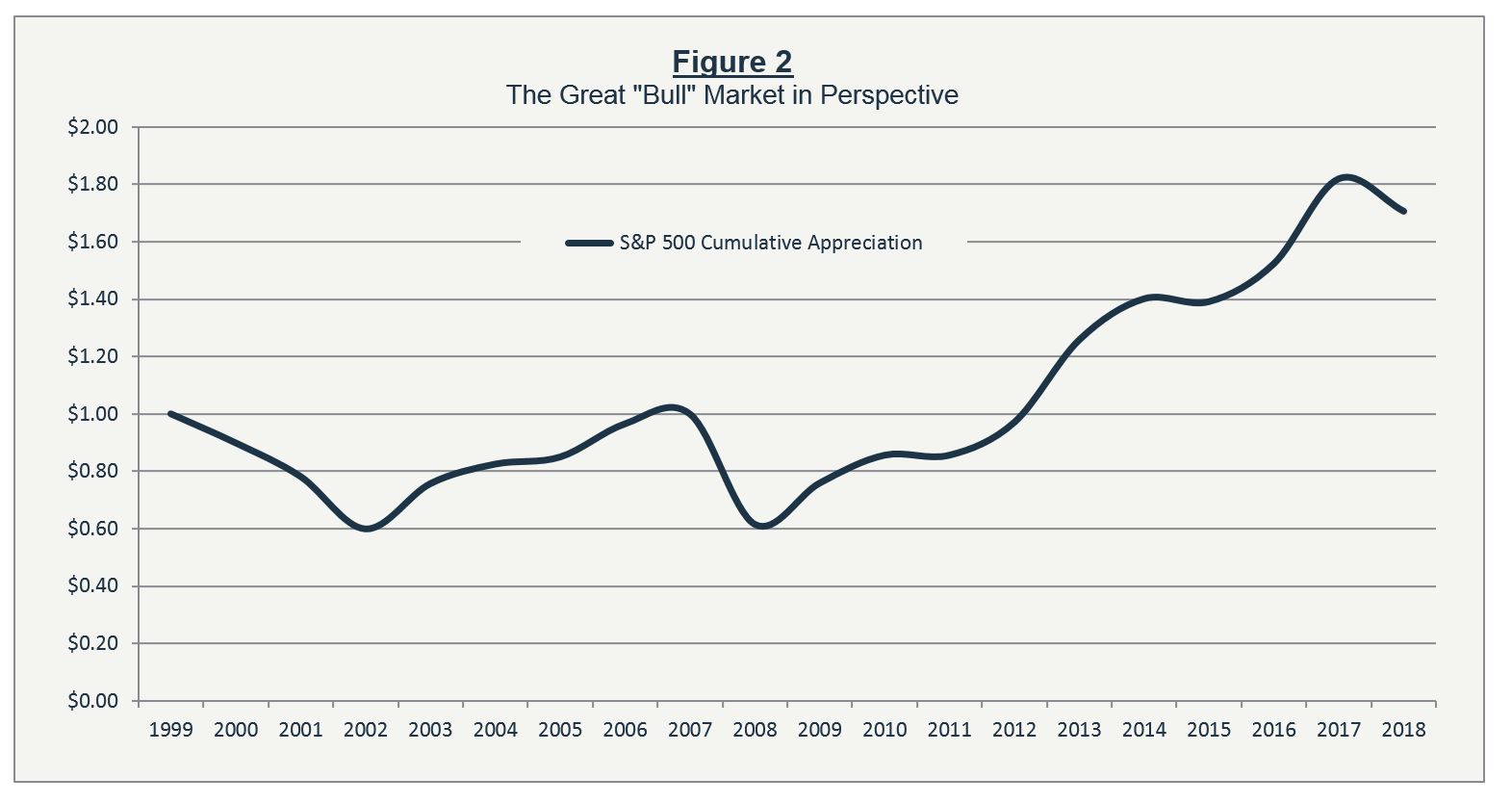 The reality is that S&P's average calendar-year performance has been 4.4% percent since the turn of the century…not double-digits.  True, two-thirds of the annual returns were positive (averaging 14.6%).  But there were lots of Maalox moments.  Seven of the last 19 years were negative (averaging -13.1%).  Two suffered massive declines.2 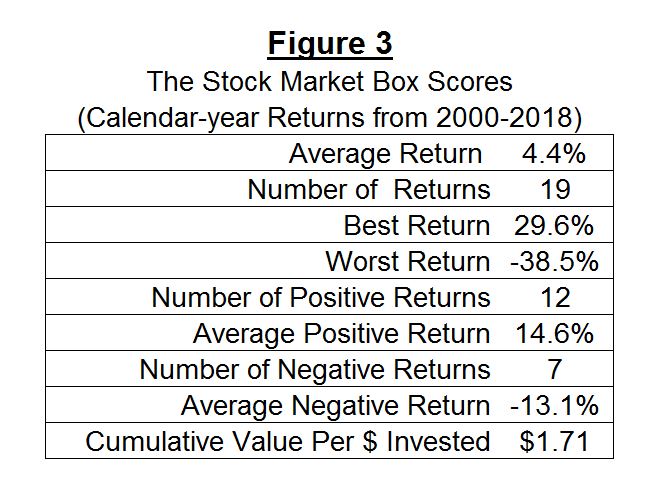 A back-of-the-envelope calculation confirms that the stock market is volatile even in the best of times (Figure 4).  But notice, too, that the S&P more than recovered no matter the magnitude of the downturn.  So, there’s opportunity in turbulence. 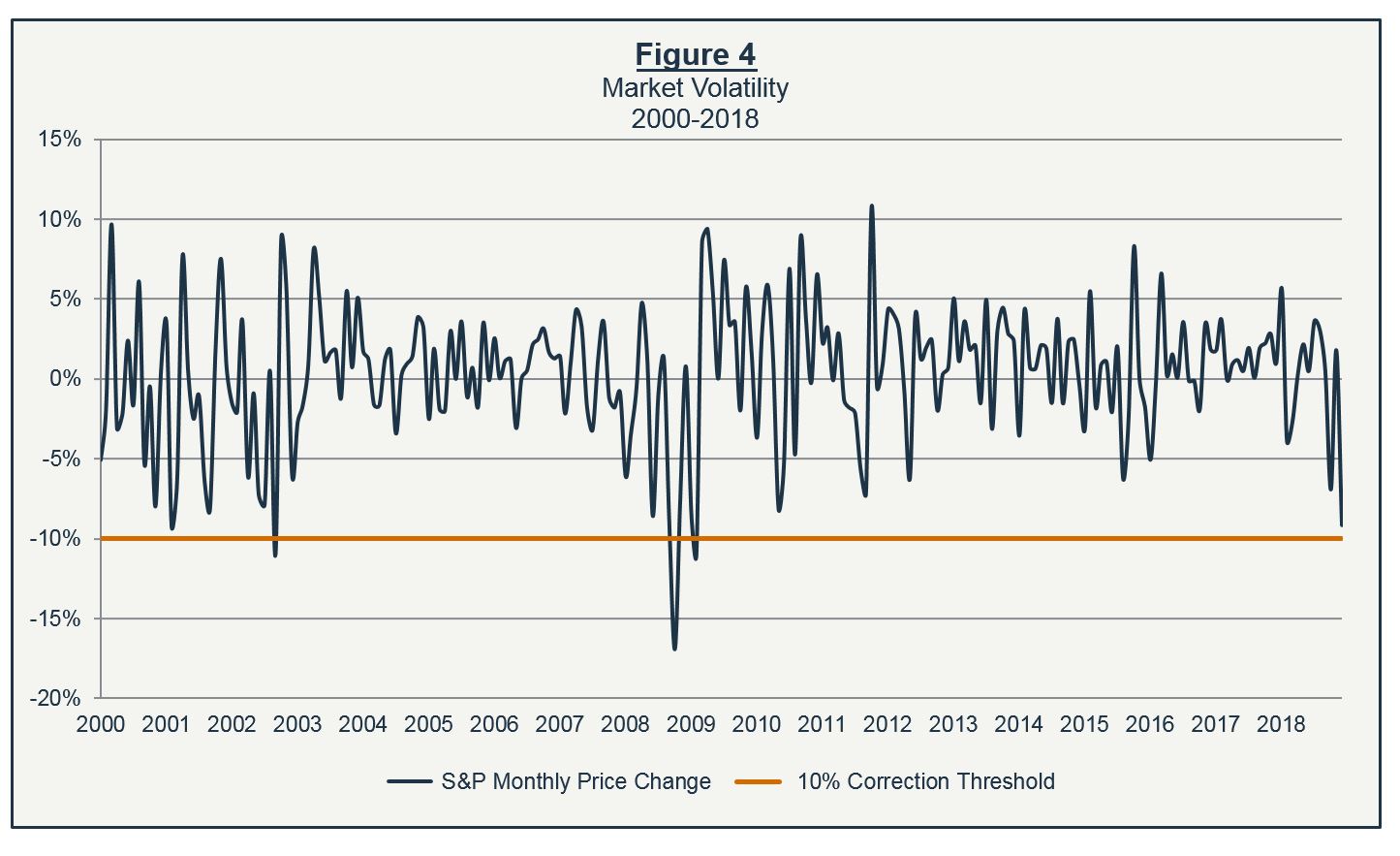 Will the market survive December’s meltdown?  It’s highly likely.  As we detailed last October, forward-looking financial asset price movements were already warning of a slowdown.3 And yes, when market prices tanked, the 2019 implicit market forecast dropped to 1.65%.  Still, based on year-end closing prices, GDP growth is still expected to be positive albeit modest. 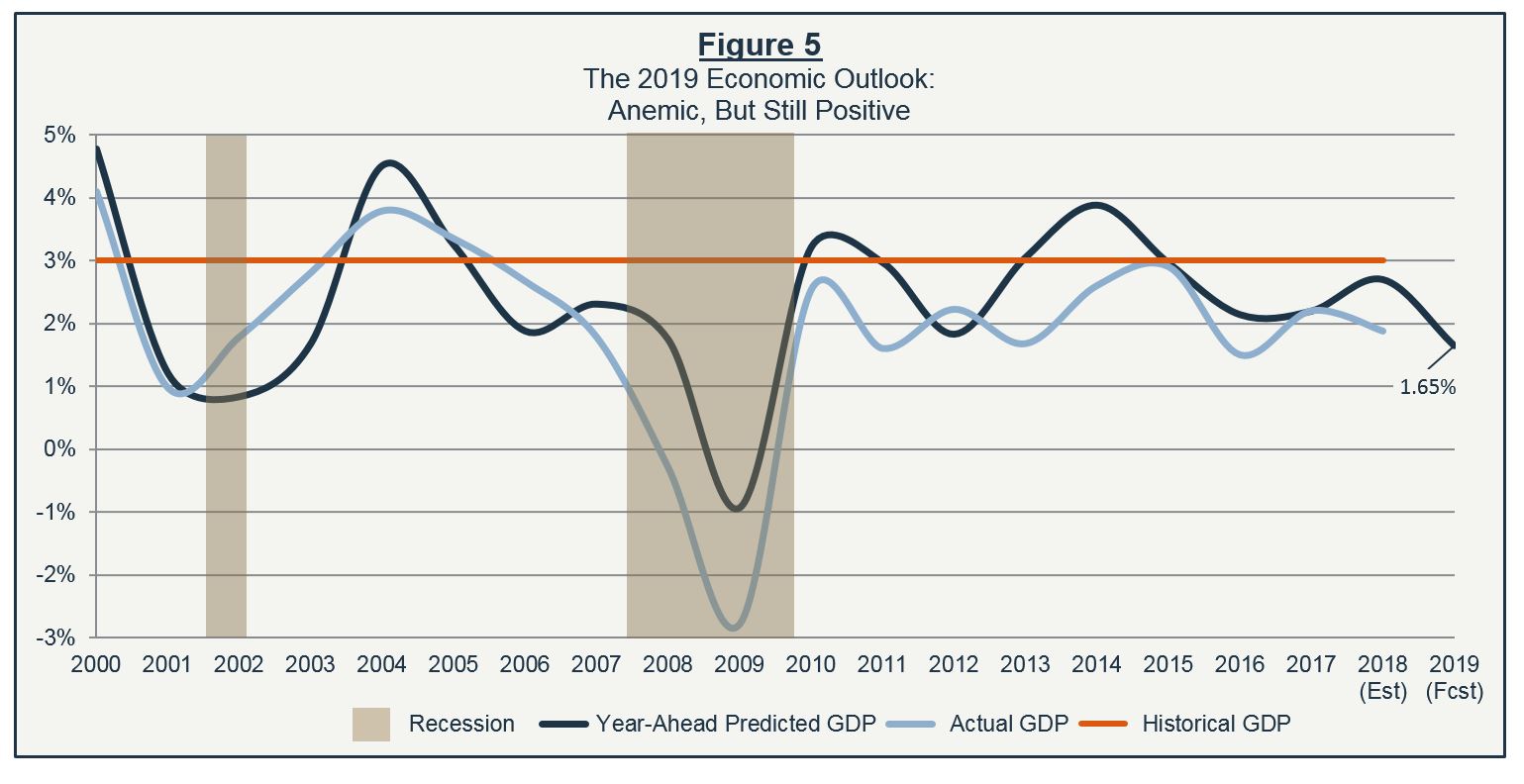 Remember, financial asset prices reflect the collective wisdom of market participants.  From this perspective, December’s setback suggests that there will be a negative economic impact.It’s a matter of timing.  And on this score, statistical analysis suggests that the delayed effect will manifest itself over the next 12-24 months.  But if history’s a guide, it’s a safe bet that the financial markets will be anticipating a recovery by the time the bad numbers show up.

The takeaway from this discussion is the importance of portfolio construction. As for the equity component, emphasize defensive issues, especially those with healthy dividend yields and a solid record of increasing annual payouts.  As Roger Babson warned three-quarters of a century ago,

“Even the most carefully selected stocks purchased with any funds are subject to severe price declines in sympathy with other stocks in a readjustment of the market.Hence it is essential that the investor should be in a secure financial position so that he will not be forced to liquidate his good holdings.” 4

Now's the time for perspective, not panic.