“If all economists were laid end to end, they would not reach a conclusion.”

Wall Street continues to bedevil the many economic pundits. It’s easy to understand why. In their book, political discord, an intractable pandemic, uneven economic recovery, and soaring energy prices don’t usually spell prosperity. Through the end of the summer, it appeared that equity markets might simply shrug off these challenges, though a weak September seemed to indicate this was unsustainable. All told, the major indexes limped across the finish line for the third quarter of 2021, with the S&P rising 0.23% and the Dow and Nasdaq declining modestly, by -1.91%, and -0.38%, respectively.

Could this just be a pause in growth as the market digests new information, or is mounting economic pressure set to reintroduce equity volatility for the near future?

Of the economic concerns facing investors, inflation is a potential showstopper. After all, investors focus on returns—the value of which is measured in purchasing power—and inflation can erode income and sap profits at its worst. So, how can investors get a feel for where it’s headed?

Regrettably, the answer is elusive. The sad reality is that academics of every stripe have argued, ad nauseam, over the cause of inflation and ways to control it to little avail. For centuries, classical economists (more recently dubbed “supply siders”) dominated the landscape. In a nutshell, classical economists support a laissez-faire approach to maximizing productive activity and are especially hostile to government interference and regulations.1 More recently, Keynesian economists—based in the work of John Maynard Keynes2—have taken the opposite view. In their opinion, government intervention is a useful tool to minimize periods of stagnation and persistently high unemployment. Their prescription: use monetary and fiscal policies to mitigate the adverse effects of recessions and depressions, much in the way we have seen over the last 18 months or so.

This approach raises concerns that such easy monetary and fiscal policy may be pushing inflation higher. A closer look, however, reveals there is far more at play in today’s economy. From global supply chain disruptions to semiconductor shortages, pandemic-induced conditions have brought inflation to the forefront. Yet, much of this upward pressure has been focused on a narrow group of goods and services, and furthermore, has proven to be transitory in most instances. Fears that inflation could become more broad-based have yet to materialize, save for a handful of unusually high consumer price index (CPI) fluctuations in the late spring and early summer. But perceived increases in consumer prices are also prone to skewness from so-called “base effects,” which arise when comparing normalized price levels to periods of unusually depressed prices—say, the spring and summer of 2020. Base effects are notably present across goods and services that saw sharp reductions in demand during the depths of the pandemic—such as oil and dining—and are now collectively moving the inflation needle despite representing just a subset of the global economy. As the post-pandemic economic recovery continues and these tough comparisons pass, dramatic year-over-year price fluctuations should subside. This belief is reinforced by breakeven inflation rates, a market-based measure of expected inflation.3 Currently, both the 5-year and 10-year breakeven rates imply average inflation of 2.4% to 2.5% over the next decade. However, 5-year rates modestly exceed 10-year rates, indicating near-term inflationary pressures should wane over time as base effects ease.

Compared with history, we are also a long way off from the rampant inflation of the 1970s and early 1980s, and there is little evidence to suggest that current economic conditions even come close to mirroring those that could produce such an outcome. Importantly, broader disinflationary trends, such as increases in labor productivity, technological innovation, and automation continue to offset upward inflationary pressures. In our increasingly modern economy, it seems highly unlikely that these disinflationary trends will reverse course, thus acting as a potential backstop against runaway prices. Additionally, going back to our discussion of Keynesian economics, increases in the money supply from monetary stimulus have yet to generate a meaningful change in the velocity of money, which has trended sharply downward since the Great Recession. Stimulative monetary policy can only have a sustained impact on economic activity, and hence inflation, if accompanied by significant credit growth and consumer spending. With banks and consumers largely flush with cash that is not being spent, demand for new credit has been marginal and not indicative of persistent demand-side inflation.

Careful examination of the historical record confirms that the lion’s share of annual CPI fluctuations is explained by prior-year credit market changes. (Figure 2). What’s more, if the exceptional test proves the rule, notice how well unbiased credit market price changes anticipated the hyperinflation of the 1970s.

While the ability of the credit market to foresee the path of inflation is impressive, it is often imprudent to trust single-point forecasts, as some room for error needs to be taken into account. In this case, we can utilize a normal distribution to approximate the probability of certain outcomes. As noted in Figure 3, this analysis produces a range of possible year-over-year changes in CPI for 2022, from 2.4% at the lower bound to 5.3% at the upper bound. That said, the chance of supernormal inflation—a rate exceeding 5% year-over-year—is very low, within the first quartile of possible outcomes. Moreover, the odds of hyperinflation akin to that of the 1970s are effectively zero according to this analysis. 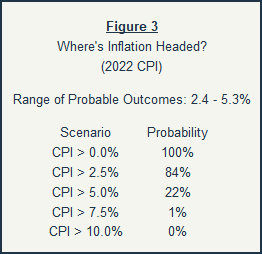 More likely, expect inflation next year to run a little higher than it has in recent memory—around 4.2% (Figure 4)—though this is not necessarily surprising given the unusual economic circumstances discussed earlier, which may well dissipate within 12 to 18 months. From a historical perspective, this rate of inflation also approximates the long-term average of 3.9%—not exactly cause for concern. Absent indications of a supernormal inflationary spike, maintaining current equity exposure seems appropriate, though tailoring portfolios to meet possible inflationary pressures provides an added benefit. In this case, investments in high quality companies with durable pricing power and scale are best positioned to weather potential inflation. 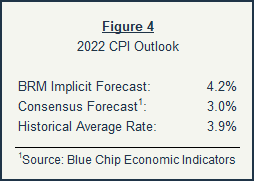 3  Breakeven inflation rates are implied by the difference between nominal Treasury yields and the yield on Treasury Inflation-Protected Securities (TIPS) of the same maturity.